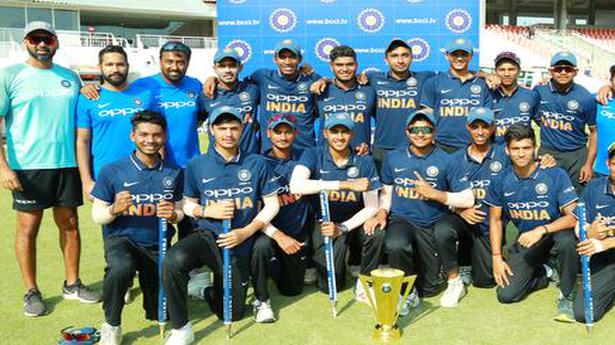 Medium pacer Sushant Mishra’s opening burst with new ball set up a comfortable 72-run win for India-B over India-A in the final of the Quadrangular under-19 one-day series at the Sports Hub here on Monday.

Chasing 233 for a win, India-A was dismissed for 160 runs with Sushant Mishra (four for 41) and off-spinner Karan Lal (three for 25) sharing the spoils.

Sushant’s sustained hostility on a lively track saw him bounce out India-A’s in form openers Qamran Iqbal and Siddhesh Veer cheaply and derailed its chase. Yashasvi Jaiswal (27) and Shashwat Rawat (27) sparkled briefly and treated the medium pacers with disdain.

Rawat looked in ominous touch as he struck Purnank Tyagi for four consecutive boundaries in an over. But both batsmen fell in quick succession while trying to attack the spinners — Shivam Sharma and Karan Lal — who chipped in with key wickets in the middle overs.

Earlier opting to bat India-B didn’t have the best of starts. But man-of-the-match captain Rahul Chandrol (70) steadied the innings by first adding 43-runs for the third wicket with Tilak Varma (38). Then Sameer Rizvi (67) helped Chandrol add 99 runs for the fourth wicket to put India-B in command when the slog overs began.

However, Chandrol holed out to Kartik Tyagi at off Shubhang Hegde and his dismissal started the rot. India-A medium pacer Tyagi bowled a superb spell in the death overs and struck crucial blows to restrict India-B, which slipped from 170 for three in the 38th over to an underwhelming 232 for nine at the end of the 50th over. The regular loss of wickets saw India-B managing only 32 runs in the last eight overs.

Kgaudise Molefe (four for 31), Andile Mogakane (three for 25) shared the spoils as Afghanistan was dismissed for 176.

The nature of Test surfaces in India have been starkly different under Virat Kohli and his predecessor M.S. Dhoni. While Dhoni exploited the home advantage with tracks that assisted the spinners, Kohli, after following that tradition early on, has adopted a fair use policy. This has helped India’s pacers come into play in a big […]

de Grandhomme, Boult ruled out of second Test against England

New Zealand paceman Trent Boult and all-rounder Colin de Grandhomme have been ruled out of the second Test against England starting here on Friday, after sustaining injuries, the team said on Wednesday. Boult had strained a muscle overlying one of his ribs on his right side but was cleared of bone stress by a scan, […]

Shaun Pollock’s astonishing control and seam movement coupled with his languid and graceful strokeplay made him a true blue all-rounder. The great South African with 421 Test scalps at 23.11 and 3781 runs at 32.31 was as influential as they come. After following the first day’s play here on Wednesday, he shared his thoughts with […]