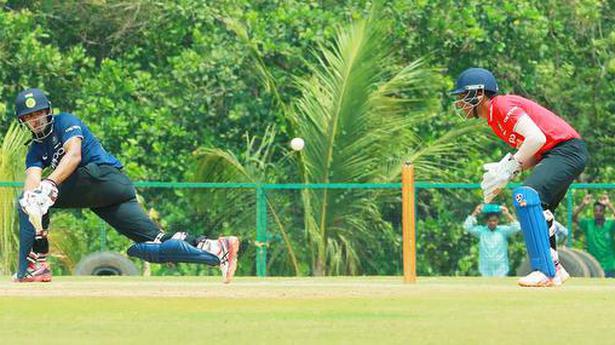 India B, with yet another spirited display, had the measure of India A in the Under-19 quadrangular one-day series at the St. Xavier’s stadium, Thumba, on Saturday.

With the two teams already having qualified for the final on Monday, the match might have held only academic interest. But that did not stop the B side from putting its best foot forward for a hard-fought three-wicket win, its third in that many matches. Choosing to field, the B side restricted the A team to 129 in 40.3 overs before overwhelming its rival in 41.4 overs – the chase being marked by a timely half-century by opener Arya Sethi (51).

It was pacers Purmank Tyagi and Prabhat Maurya who helped the B side to gain control, reducing the A team to 25 for three by the end of the eighth over. It did look like Yashasvi Jaiswal and Dhruv Jural were in line to help the A team stage a recovery before off-spinner Shivam Sharma came along and in tandem with Tyagi triggered yet another slide.

With Karan Lal too chipping in with two wickets, India A finally was bowled out, leaving time for as many as seven overs before the break.

In reply, India B had a confident start and was cruising at 65 for one, mainly due to the effort of Sethi, but the two left-arm spinners in Shubhang Hegde and Harsh Dubey reduced the batting side to 75 for five in quick time. However, though it did lose two more wickets, the B side was not to be denied as Atharva Vinod Ankolekar and Tyagi got together to see their side through.

Dattajirao, who captained India in 1959 and is the father of former India opener Aunshuman Gaekwad, was part of the Indian team that toured the West Indies in 1953 Source: thehindu.com Related

A budding cricketer from the city, named S.V. Rahul, has been picked up by the Andhra Cricket Association to undergo a month-long special training camp to improve technique at Haileybury in the United Kingdom. The 13-year-old southpaw, who also bowls left-arm spin, has been a consistent performer in the district circuit and is a resident […]

The Kapil Dev-led Cricket Advisory Committee (CAC) cannot be made part of the selection process for the Indian team’s support staff as “time constraints will not allow” BCCI to amend their constitution, a senior BCCI official said. The selection of Ravi Shastri’s coaching team will take place on Monday and the interviews for the batting, […]