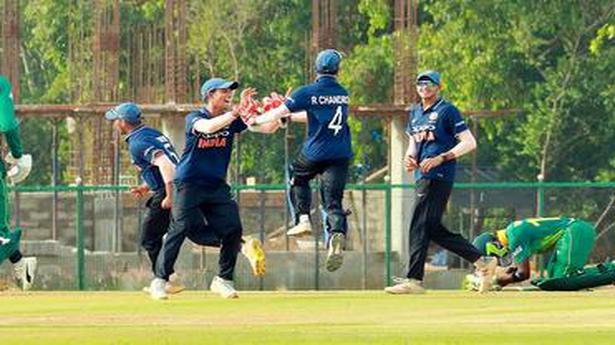 India-B displayed dogged spirit as it pulled off a sensational one-run win over South Africa in the Under-19 quadrangular one-day series at the St. Xavier’s Stadium, Thumba, on Thursday.

The exciting win, which has assured the team a place in the final on Monday — irrespective of the result against India-A on Saturday — came about in dramatic fashion as South Africa seemed in full command and looked set to notch up its first win in the tournament.

Chasing the Indian total of 198, the Proteas were just one run short of a certain victory before finishing 197 for nine — there being three run outs in the last over bowled by pacer Sushant Mishra.

With rival skipper Matthew Montgomery marshalling his bowling resources well on a track that offered bounce, India-B, having chosen to bat, found itself restricted well shy of a fighting total.

Recovering from a shaky start, having lost Arya Sethi early on, there were signals of a fight back when Tilak Varma and Pragnesh Kanpillewar shared a 75-run partnership for the second wicket.

However, the duo departed in the space of five deliveries and skipper Rahul Chandroi and Varun Lavande fell to a double strike by left-arm spinner Bryce Parsons in the 27th over.

The Indians lost wickets at regular intervals before Sameer Rizvi and Prayas Ray Barman did their best to resurrect the innings.

However, the bowlers came up with a reassuring display to reduce South Africa to 35 for three in 10.1 overs. And though the visitors did lose two quick wickets at the total of 79, Ruan Terblanche and Andle Mogakane took control and did look well set.

Off the second ball of the last over, Terblanche, going for the winning run, was caught short by Rahul Chandroi’s quick throw.

Jarred Jardine fell in the same fashion the very next ball, off a direct hit by Barman and as tension mounted the South Africans choked as Nonelela Yikha found himself well short to another direct hit by Mishra himself.

South Africa added batsman Keegan Petersen to their squad for the second Test against England in Cape Town next week, replacing the injured Aiden Markram, Cricket South Africa said on Sunday. The uncapped 26-year-old scored 111 for South Africa A against England last week in the last warm-up game before the first Test in Pretoria, […]

Yuvraj Singh decides to come out of retirement, writes to BCCI

Punjab Cricket Association with an offer to come out of retirement for the benefit of Punjab cricket. He has agreed to resume for the State at least in the T20 format Source: thehindu.com Related