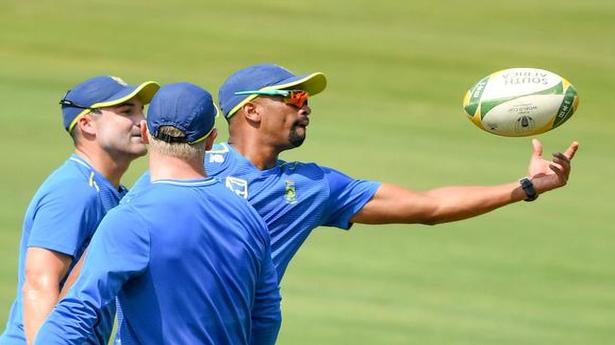 Familiarity can lead to complacency. And adversity can lift sides in unfamiliar settings.

Cricket is a funny game and surprises are not uncommon. Yet, India, competitive abroad and ruthless at home, should start the three-Test series against South Africa as the overwhelming favourite.

And the dusty cream coloured track at the ACA-VDCA Stadium should suit the top-ranked Test side in the world as the first Test gets underway here on Wednesday.

For a South African side, rebuilding, the Freedom series presents a wonderful opportunity to display togetherness and fight. Proteas needs heroes to emerge.

Tuesday was bright here, but spells of rain have been forecast during the Test. Damp conditions and a cloud cover could provide a lifeline to the South Africans with their world class pacemen, led by Kagiso Rabada.

If the conditions remain hot and dry, and cracks develop on the surface, apart from spin, reverse swing could dent line-ups.

The host has made some important choices. Wriddhiman Saha, who last figured in a Test at Cape Town in 2018 before being derailed by injuries, is back in the eleven.

Despite questions being raised about Rishabh Pant’s choice of strokes, Saha’s skilful and superior glovework would have swung the argument in his favour.

On subcontinental pitches with turn and uneven bounce that deteriorate further, standing up to spinners is the hardest job for a ’keeper and Saha appears the right man for the job.

R. Ashwin and Ravindra Jadeja, who is just two short of 200 Test scalps, are together again in the eleven. And Saha’s presence will lift their confidence levels.

Interestingly, legendary wicketkeeper-batsman Adam Gilchrist had said some months ago that when Saha returned from injury, the question of who should keep should be left to the Indian bowlers.

All eyes on Rohit

Much focus will be on Rohit Sharma too. It is clear that the team management is keen on giving Rohit a run as an opener.

Making runs, particularly at the top of the order, is a lot about belief and Rohit, a natural, will receive the time and space to find his way.

He has a barrage of shots but does Rohit possess the technical nous and the tightness of game to make runs away from the subcontinent where stiffer tests await India?

K.L. Rahul is still young and India has the talented Prithvi Shaw, once his ban ends, waiting in the wings. Rohit will receive an extended stay but is India missing the big picture?

In the pace attack, the lanky Ishant Sharma gets the nod over Umesh Yadav. The seamer is at the peak of his career, with control, bounce and movement.

The presence of the composed Hanuma Vihari with his cultured batting at No. 6 lends balance to the Indian line-up.

South Africa is a combative side. At the top of the order, Aiden Markram is a compelling shot-maker while southpaw Dean Elgar is an old fashioned fighter.

Skipper Faf du Plessis is as feisty as they come while wicketkeeper-batsman Quinton de Kock drips with ability. Temba Bavuma is a developing middle-order batsman.

South Africa could play Vernon Philander, who combines seam movement with control, as an all-rounder at No. 7 and pick a second spinner to support the world class left-armer Keshav Maharaj. The explosive Rabada could be partnered by the mercurial Lungi Ngidi or the even quicker Anrich Nortje.

Pace has to combine with accuracy. As du Plessis put it, speed alone would be a waste in India.

We will understand challenges only if we play: Tendulkar

Sachin Tendulkar began his white-ball cricket career in New Zealand in 1990. He said it was one of the “toughest things” to play the white ball properly, but added that playing white-ball cricket in Australia on his first tour there in the 1991-92 series was more challenging. While sharing his thoughts on the pink ball […]