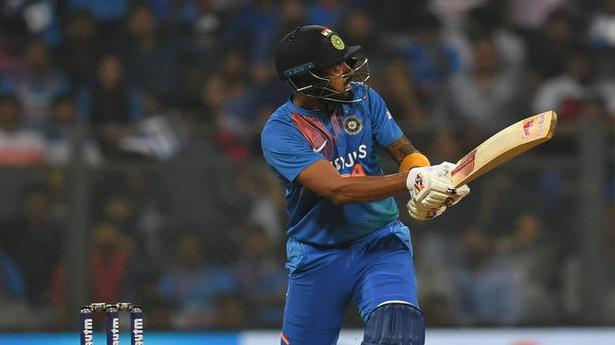 India’s star-studded batting line-up couldn’t have asked for a better venue – and more importantly situation – that the series-decider versus West Indies at the Wankhede Stadium to overcome recent obstacles that have jeopardised it in the shortest format.

No wonder then that a gargantuan total of 240 for three – with Rohit Sharma and K.L. Rahul laying the bricks in the first half and a vociferous captain Virat Kohli building vertex at the death – proved to be too much to handle for West Indies. While the Wndies batsmen – with opener Evin Lewis unable to bat after being stretchered off the field having hurt his leg in the outfield – crumbled under the pressure, India’s rejigged bowling combination – with Mohammed Shami and Kuldeep Yadav coming in for Ravindra Jadeja and Yuzvendra Chahal – stuck to its task to complete a convincing 67-run win.

But the bowlers owed the victory to the famous triumvirate of India’s batting. Ten of the 20 overs in India’s essay saw at least 10 runs being scored, with three of them fetching 20-plus. The trio scored all of India’s runs that came off the bat, plundering 19 fours and 16 sixes to rattle the West Indian bowlers.

Rohit had a field day in his hometown while Rahul was at his wristy best after Kieron Pollard inserted India for the second consecutive match. But Kohli’s finishing touch overshadowed even the duo’s exploits in the first half.

With the openers in superlative touch – Rohit waging his long handle at will while Rahul combining his trademark daft touches and flicks – the Windies bowling went haywire with long-hops and full-tosses being offered in plenty. To the duo’s credit, they didn’t throw their wickets away till the game was virtually taken away from the visitors.

The Powerplay fetched 72 runs, thanks to the duo’s severe assault on all the four bowlers that were employed. Kesrick Williams, whose duels with Kohli have been a highlight of the series so far, was welcomed by Rahul with an upper cut over third-man fence sandwiched between two elegant cover-drives.

Rohit then gave left-arm spinner Khary Pierre a taste of his raw power with two sixes and a four off successive balls, with the swept six overshadowing the other strokes. By the time Rohit miscued a pull off Williams in the 12th over, the duo’s 135-run stand had set the stage for an elephantine total.

Despite Pant failing to utilise promotion in the order, Rahul and Kohli ensured India continued to literally toy with the Caribbeans. With Rahul cruising towards the three-figure mark, Kohli took charge and went after Jason Holder in an encore of Hyderabad in the 15th over. The over saw three sixes – one by Kohli and the other two off Kohli’s blade, including a trademark whip.

Despite Rahul falling short of his hundred with two balls remaining, Kohli finished the innings on an ideal note, with a six into the sight screen off Sheldon Cottrell.

The fate of the matches was all but sealed once the Windies was17 for three in the fourth over. But Kieron Pollard’s power-hitting – albeit not in Mumbai Indians’ blues – gave a full house plenty to cheer before the visitors finishing way off the mark.

Kane Williamson flashed a smile before getting down to answering questions. He was pleased by his team’s 2-0 sweep over the No. 1-ranked Test team in the world. This was New Zealand’s sixth straight Test series win at home and even in his moment of triumph, Williamson was measured and insightful with his views. No […]

Rahane signs up for Hampshire

India batsman Ajinkya Rahane has signed up with English county side Hampshire. He becomes the first Indian to represent Hampshire. Rahane will feature in eight county matches from May to July, subject to visa clearance. The Mumbai player will replace South Africa’s Aiden Markram who will be representing his country in the World Cup. “I […]