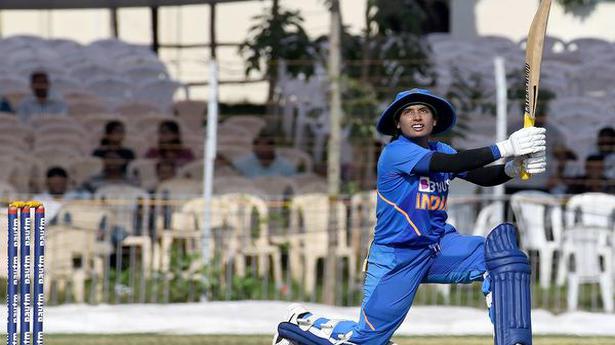 India held its nerve to record a five-wicket win over South Africa in the second women’s ODI at Reliance Cricket ground here on Friday. Chasing a stiff 248-run target, the home team was cruising with Mithali Raj (66, 82b, 4×8) and Punam Raut (65, 92b, 7×4) at the crease, until the duo fell within the space of four balls.

The exciting win gave India an unassailable 2-0 lead in the three-match series. It marked the nation’s highest-ever successful ODI chase, bettering the previous target of 245 (against South Africa in February 2017).

It was Mithali and Punam who laid a solid foundation, adding 129 runs for the third wicket. They dispatched the loose stuff to the boundary, and ran briskly between the wickets.

Mithali reached her 53rd ODI fifty with a single to long-on, but with no scoreboard at the ground, she did not realise that she had reached the milestone. She later got the message, and raised her bat to the crowd.

Punam was a tad more cautious than Mithali, but equally effective. Both Mithali and Punam eventually fell to poor shot selection, with Mithali slashing hard outside off and Punam attempting a dangerous scoop.

The home team was helped by some wayward bowling from South Africa, which sent down 29 wides.

Put in, South Africa came up with a much improved show to post a competitive total. Openers Lizelle Lee (40, 54b) and Laura Wolvaardt (69, 98b) were in fine touch during their 76-run partnership.

The match was briefly halted when a dog ran onto the field during the Indian innings. Several ground security officials rushed to catch the intruder, but the dog proved too quick for them.

After hanging out near the boundary rope for a short while, the dog made its way out of the open gate door to huge applause from the amused crowd.

For former India captain Mohd. Azharuddin life has come a full circle. Out in the wilderness following match-fixing charges, the 56-year-old Azhar is now duly-elected Hyderabad Cricket Association president involved in the preparations for the India-West Indies T20 International here on Friday. “All that is in the past now. I can’t keep thinking about that […]

Indian captain Virat Kohli played `gully (street) cricket’ with children during a shoot in the Bicholi Mardana area here. Kohli, who was rested for the three-match T20 series against Bangladesh which India won 2-1, will lead the side for the two-match Test series beginning here on Thursday against the visitors. The second match of the […]

India may have run away with the series by raising its standard when it mattered most, but the manner in which the T20I series versus West Indies panned out over the last week, both camps will have plenty of positives to take from three games. Despite losing the series, West Indies will be a happy […]