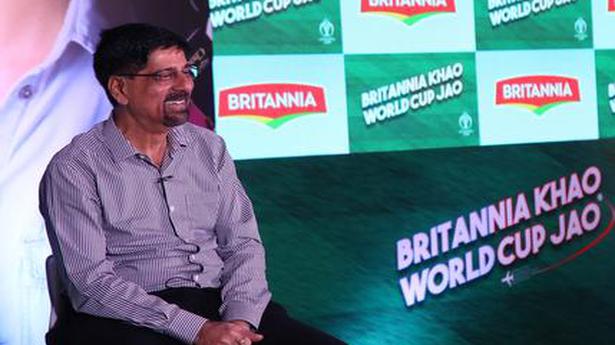 Krishnamachari Srikkanth knows a thing or two about the ICC World Cup.

After all, the belligerent opener — with 38 priceless runs taking on a lethal four-pronged West Indian pace attack on a green pitch with seam movement and bounce — was the top-scorer in the 1983 World Cup final.

And the last time all teams played each other once before the knock-out phase — in the 1992 World Cup in Australia and New Zealand — Srikkanth was an integral part of the Indian team.

So, he comprehends the challenges of the format in the upcoming World Cup.

When Dhoni’s Dashers triumphed in the 2011 edition on a memorable night in Mumbai, Srikkanth was the chairman of the selection panel.

Talk about World Cup and Srikkanth’s face lights up.

After giving away air tickets to England and back to the first batch of the Britannia Khao World Cup Jao winners, the former India captain spoke about the premier ODI competition here on Thursday.

Srikkanth said: “Consistency will be the key in a gruelling format such as this. There are no weak links. At the same time, you can come back in this format even if you do not have a great start in the competition.”

He was impressed with India’s top three. “When you have Rohit Sharma, Shikhar Dhawan and Virat Kohli as the first three batsmen, you can feel very confident.”

Should M.S. Dhoni bat No. 4? Srikkanth said that would depend on the conditions. “In England, if there is a cloud cover during a game, then the thinking and the batting order could be different. If there is sunshine, you have a different game-plan. The difficult part is that the conditions change quickly.”

Srikkanth added, “Dhoni has been in brilliant form in the IPL and that augurs well for the Indian team going into the World Cup.”

The former Indian skipper was impressed with India’s pace attack. “In Bumrah, Bhuvneshwar, Shami, and Hardik Pandya, India has a very good bunch of pacemen and teams will be wary of the Indian attack.”

He observed: “If conditions favour seam bowling then someone like Vijay Shankar might figure in India’s plans as a support seamer who could strengthen batting. India has a potent spin attack too and is well balanced.”

Srikkanth picked India, England, Australia and the West Indies as the four semifinalists. “The West Indies could be the surprise packet,” he said.

He was impressed by Kohli’s passion, drive and commitment. “India is in with a definite chance,” felt Srikkanth. He comprehends the dynamics of the World Cup.

Arpit Vasavada, Saurashtra’s rescuer in the semifinal against Gujarat, played the role of a consolidator against Bengal to strengthen the host’s position in the Ranji Trophy final at the Saurashtra Cricket Association Stadium here on Tuesday. Vasavada’s second consecutive century (106, 287b, 11×4) within a week and his 142-run chanceless stand with childhood friend Cheteshwar […]

The India senior selection committee will meet here on Thursday to pick the squad for the three-Test series against South Africa beginning on October 2. The main focus will be on getting the opening combination right in view of the team’s unimpressive record on this front, coinciding with K.L. Rahul’s long struggle. White ball vice-captain […]

How far can the iridescent Ben Stokes travel? He has this astonishing will and belief to back his compelling skillset and physical strength. And he is only 28. His game is about focus, intensity, and staying strong under pressure. As we saw in that nerve-jangling World Cup final and the pulse-pounding Leeds Test, he is […]