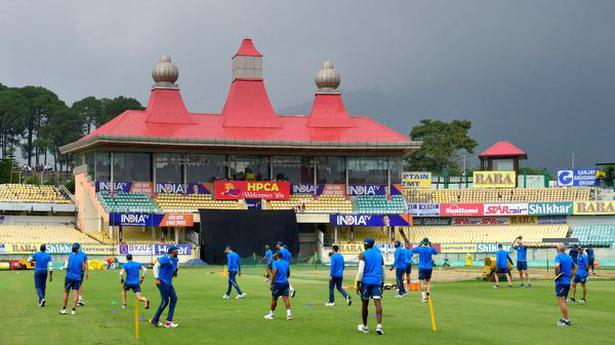 With just around 13 months to go for the World T20 in Australia, many strong contenders have begun their quest for getting their squads right.

India is already in preparatory mode after testing out a few new names in the West Indies. An almost unchanged squad takes on South Africa in the three-match series beginning here on Sunday.

At home, India has never experimented with inexperience like the one seen in the present bunch of specialist bowlers. Leggie Rahul Chahar, cousin Deepak and Navdeep Saini have played a total of six matches.

Left-arm pacer Khaleel Ahmed, who is yet to firm up his place among the T20 regulars, has figured in 11.

The venues of the first two matches — here and Mohali — should help the faster bowlers get into the groove before travelling to Bangalore.

Though heavy rain late on Thursday night should leave some moisture under the covers, a 7 p.m.-start considerably brings down the advantage offered by the conditions at this hilly destination.

Moreover, the surfaces to be used in this series are not likely to offer the Indian bowlers the kind of assistance that the ones in the West Indies did.

Given a longer run and backed by performances, at least a couple of these bowlers could be in reckoning when the selectors meet to choose the squad for T20 World Cup.

Like Rahul Chahar, allrounder spin-options Washington Sundar and Krunal Pandya are also the beneficiaries of the selectors’ rotation policy.

What gives the selectors, captain and coach the confidence to try out such a combination is the fact that South Africa, too, is in a rebuilding mode.

Apart from speedster Kagiso Rabada and left-arm chinaman bowler Tabraiz Shamsi, the other specialist bowlers in the squad are those trying to establish themselves in the game’s shortest format.

Nortje, regarded as one among the best from South Africa, missed this year’s World Cup owing to a thumb injury.

But what brings balance to the South African bowling, despite this apparently inexperienced set of specialists, is the presence of bowling allrounders Dwaine Pretorius and Andile Phehlukwayo, both part of South Africa’s forgettable World Cup campaign in England.

The duo, along with Rabada and Shamsi, gives wicketkeeper-captain Quinton de Kock quite a few options.

Meanwhile, the South African squad had a three-hour practice session at the HPCA ground. The Indian side arrived in the city in the evening.

Andre Russell played like a man possessed to blast an extraordinary 49 off 19 balls and muscle Kolkata Knight Riders past the target of 182 set by Sunrisers Hyderabad, in an entertaining IPL encounter at the Eden Gardens here on Sunday. With Knight Riders needing 53 runs in the last three overs, the West Indian […]

New Zealand captain Kane Williamson and Sri Lanka’s Akila Dananjaya have been reported for suspect bowling action after the first Test between the two sides in Galle, the International Cricket Council (ICC) said on August 20. Both the players are right-arm off-break spinners and their bowling actions came under scrutiny during the opening Test which […]

Prithvi Shaw’s hopes of making an India suffered a major dent as it was confirmed that the Mumbai opener has a labral tear in his left shoulder after injuring himself in the field during the opening day’s play. As a result, the BCCI medical team has asked Shaw, in contention for the reserve opener slot […]