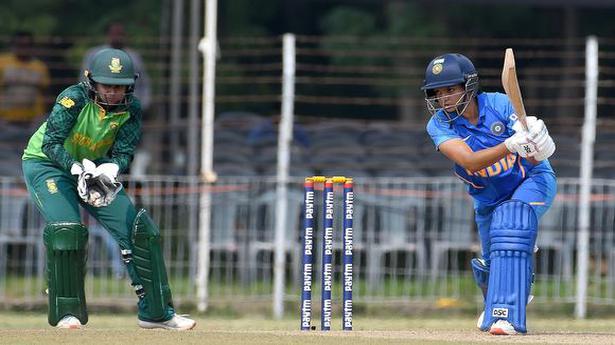 India cruised to an eight-wicket win over a shoddy South Africa in the first One-Day International at the Reliance Cricket Ground here on Wednesday.

The openers got the home side on the right track with a solid 83-run stand. Jemimah was adventurous with her strokeplay, while Priya was happy to block.

Jemimah could have got a big score, but her across the line heave to Nondumiso Shangase cut her exciting essay short. Priya started nervously, before opening up with a few crisp drives. It was a day to remember for 23-year-old Priya, who took India past the finish line in the company of seasoned captain Mithali Raj (11 n.o.).

“I received a call from my father this morning. He told me to take my time and stick around at the crease. His advice worked quite well,” Priya said. The happy occasion could have been ruined had Marizanne Kapp held on to a simple catch offered by Priya, batting on 6.

The 36-year-old Mithali, incidentally, has now completed 20 years in international cricket. Her maiden appearance came in an ODI against Ireland back in June 1999.

After opting to bat, South Africa struggled to get going. Pacers Jhulan Goswami (three for 33) and Shikha Pandey (two for 38) got among the wickets, while the spin trio of Ekta Bisht, Deepti Sharma and Poonam Yadav kept things tight.

The batters were all at sea against the generous flight offered by the slow bowlers. The visitors did not get to the pitch of the ball, and ended up playing airy shots well away from the body.

The experienced Trisha Chetty (14, 17b) attempted to slog left-arm Ekta out of the park, but ended up stumped. Ekta then deceived Mignon du Preez (16, 16b) in the air, dragging her out to offer a second stumping to wicket-keeper Taniya Bhatia. Laura Wolvaardt (39, 62b) fell to off-spinner Deepti Sharma, who got one to go through bat and pad.

Trisha, Mignon and Laura paid the price for committing to the front foot much too early and without good reason. Only Marizanne showed the skill required to stay alive, playing the ball late and under her nose.

It was Jhulan who started the fire, trapping Lizelee Lee leg-before with a sharp inswinger in the very first ball of the match. Shikha put the skids by sending back skipper Sane Luus and Nadine de Klerk in the same over.

Virat Kohli to play all formats for three years

How long can Virat Kohli continue playing all three formats considering India’s hectic schedule right through the year? The India skipper answered, “I think it’s been eight or nine years that I have been playing almost 300 days a year with the travelling and practice sessions. And the intensity is right up there all the […]

Rashid Khan picked up six second innings wickets to lead Afghanistan to a famous 224-run win over Bangladesh in the maiden test match between the two sides at Chattogram on Monday. Racing against time to complete a win with less than four overs left in the weather-hit match, the longest-format rookies bundled out the hosts […]

Favourite? Certainly not. Contender? Not at all. Dark horse? Umm… Not really. Minnow? What?! The team doesn’t fit into any of these categories for the quadrennial cricket gala, so how then would you describe Sri Lanka’s position ahead of the World Cup’s 12th edition. The islanders can only be thought of as ‘no-hopers’. The kind […]