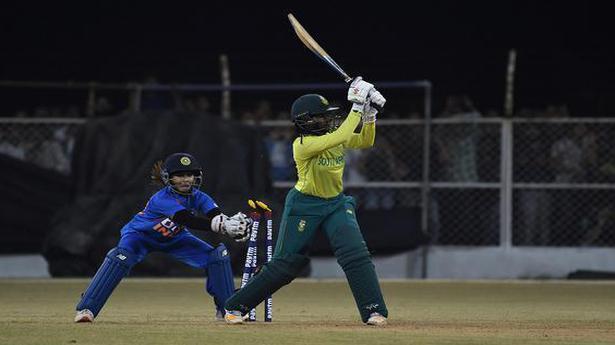 With the Diamond City’s long wait for international cricket finally over, the Indian women gave the fans another reason to head home with a big smile as they held their nerve to pip South Africa women by 11 runs in the opening T20I at the Lalbhai Contractor Stadium on Tuesday.

Despite Mignon du Preez’s brilliant counterattack, the spinners ensured that India successfully defended a total of 130. Had the South African received some support from the other end, she could well have taken the Proteas past the finish line instead of going for an almighty heave and getting stumped with 12 needed off three balls.

While du Preez planned the chase to near-perfection, the Indian tweakers had the South Africans dancing to their tune. Though the visitors’ chase got off to a flyer, with 18 coming off the first over bowled by Pooja Vastrakar, seasoned pacer Shikha Pandey cleaned up the dangerous Lizelle Lee. The spinners then took over.

Offie Deepti Sharma started with a double-wicket maiden, outsmarting Tazmin Brits in flight for ’keeper Taniya Bhatia to do the rest and forcing Nadine de Klerk to nick one behind. While Deepti didn’t concede a run till she bowled at the death, leggie Poonam Yadav picked up wickets off successive balls. She drew Laura Wolvaardt forward, the googly sneaking through her defence to rattle the timber. Off the next delivery, skipper Sune Luus hit straight to Smriti Mandhana at cover.

The dynamic du Preez took calculated risks to keep the game alive till the final over before the team fell short.

Earlier, Harmanpreet, who was making a return to international cricket after a shoulder injury forced her to miss the previous series against England, came up with a gutsy knock to take the hosts to a modest total.

Harmanpreet, who was in her element, forged a 46-run stand with Deepti for the fourth wicket — the highest of the match. She used her feet exceptionally well against the spinners to build on Smriti and Jemimah Rodrigues’ foundation in PowerPlay. While Jemimah’s cover drive off Shabnim Ismail showed her class, Smriti’s twin boundaries off Tumi Sekhukhune gave the spectators, numbering more than 10,000, a chance to go wild.

Both the sides featured a debutant, with India’s 15-year-old Shafali Verma being under the spotlight. The opener, however, perished off the fourth ball of the contest, without opening her account, as Sekhukhune lunged to her left to pluck an on-drive off Ismail. The other debutant, left-arm spinner Nonkululeko Mlaba, wilted under pressure, bowling too short and even bouncing the ball twice while bowling to Jemimah early on in her spell.

Amid a swift change in plot in the last one hour, gritty half-centuries by Avi Barot and Vishvarajsinh Jadeja took Saurashtra to 206 for five on the opening day of the Ranji Trophy final against Bengal at the Saurashtra Cricket Association Stadium here on Monday. Also read: Ranji Trophy 2019-20 final: The stats that matter […]

South Africa’s decision to overlook Temba Bavuma for the second Test against England earlier this month turned the spotlight on the complicated, sensitive issue of racial representation again. By omitting Bavuma, who had recovered from injury, South Africa fell short of its transformation target — which requires the team to field six coloured players, including […]

Too early to say: Ganguly on four-day Tests

BCCI President Sourav Ganguly on Monday said it’s “too early” to comment on the International Cricket Council’s proposal to make four-day Tests mandatory as part of the World Test Championship from 2023. “First we will have to see the proposal, let it come and then we will see. It’s too early to say. Can’t comment […]