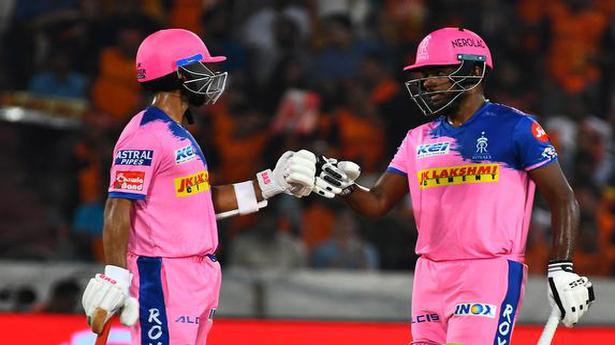 David Warner and Jonny Bairstow put behind a dismal bowling performance by Sunrisers Hyderabad with their brilliant batting to pull off a five-wicket win over Rajasthan Royals in a Vivo IPL league match at the Rajiv Gandhi Stadium here on Friday night.

It is not very often that a superbly-paced century — like the one from Royals’ Sanju Samson — goes in vain. But that is exactly what happened as Sunrisers posted their first win in two games while Royals suffered a second straight loss.

The flamboyant Warner meant business straight away — he flicked the first ball for a four and then pulled a six off pacer Dhawal Kulkarni in the first over of the chase. He was successful with his intent — to score the maximum in the PowerPlay — as Sunrisers got 69 for no loss with Warner hitting eight fours and a six.

Bairstow too was not far behind with some big strokes despite playing second fiddle. The openers put on 100 in just 8.5 overs — a reflection of the lacklustre Royals attack — before Warner provided some relief by pulling Ben Stokes straight to the fielder in the deep in the 10th over.

Soon, Bairstow too perished to a brilliant catch by Kulkarni near the fence off leggie Shreyas Gopal. However, Vijay Shankar ensured there were no further twists and turns as the home team romped home in style despite Gopal’s three-wicket haul.

Earlier, after Royals opted to bat, leg-spinner Rashid Khan struck the first big blow when he cleaned up the dangerous Jos Buttler with his second ball. The Englishman was out attempting to sweep and only ended up exposing his leg-stump. Incidentally it was the fourth time that the Afghan bowler has got rid of him.

It was a slow start for Royals as they managed only 35 for one in the PowerPlay with three boundaries. But that soon changed when the 24-year-old Samson struck his second IPL century.

His 119-run stand for the second wicket off 76 balls with captain Ajinkya Rahane set the base for what at that time seemed a challenging score on a pitch where bowlers had little to cheer about. The two demonstrated the efficacy of playing proper cricketing strokes without slogging across the line.

Sunrisers captain Kane Williamson shuffled his bowlers around with even Rashid bowling his four-over quota in three spells! To the dismay of the home crowd, star bowler Bhuvneshwar Kumar was meted some rough treatment by Samson.

Pakistan’s teenage fast bowler Naseem Shah led the hosts’ recovery against Sri Lanka on a riveting opening day in Rawalpindi as Test cricket returned to the country on Wednesday for the first time since a militant attack in 2009. Sri Lanka started strongly but Pakistan fought back through their four-pronged pace attack as the visitors […]

With India’s pacers continuing their good work against England, Australia and West Indies even in the not-so-friendly conditions at home, Lara reiterated that the attack reminds him of the Caribbean quartet of the 1970s and 1980s. “Unbelievable! Jasprit Bumrah — who isn’t playing now — I saw him in the West Indies and I don’t […]