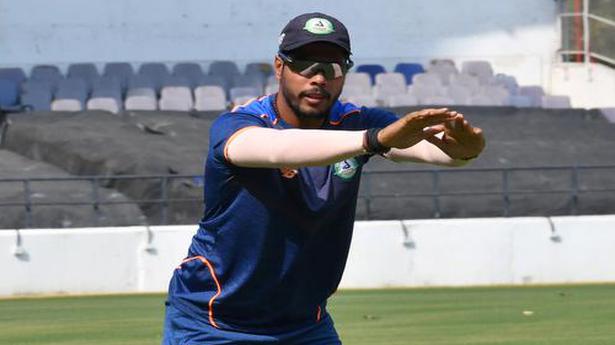 The stage is set for the concluding part of the inter-State Twenty20 carnival here from Friday before glittering IPL extravaganza begins in Chennai in about two weeks. Ten teams will compete for the Syed Mushtaq Ali Trophy, the last of the current season’s BCCI’s senior men’s tournaments.

An action-packed five days, with four matches scheduled each day from March 8 to 12, followed by the final on March 14. The topper of the two groups will vie for the trophy.

Vidarbha surprised one and all by retaining the Ranji Trophy and the Irani Cup. The team has proved to be a force to reckon with, and the inclusion of fast bowler Umesh Yadav in the squad at the expense of the architect of its Ranji Trophy win last year, Rajneesh Gurbani, reveals a lot about the champion team’s ambitions.

But Vidarbha, despite advancing to the Super League from the preliminary round, is not actually seen as “among the favourites” to take home the title.

Coach Chandrakant Pandit, was on the job, though, on Wednesday at the Holkar Stadium, giving extensive catch practice. Whether the team, without Wasim Jaffer, has the wherewithal to surprise a number of teams with Twenty20 flair, has to be seen.

While Vidarbha completed its training and net session before sunset, defending champion Delhi went about its business under the watchful eyes of coach Mithun Manhas and captain Ishant Sharma.

Delhi has made one change from the qualifying stage, bringing in Vikas Tokas for Gaurav Kumar.

Delhi is one of the five-title winning State teams that will feature in the tournament; the others being Maharashtra, Bengal, Gujarat, and Uttar Pradesh. East Zone won it in 2017. Tamil Nadu won the inaugural inter-State Twenty20 in 2007 and Baroda lifted the trophy five seasons ago.

The 10 teams, have in the five preliminary rounds, played at five centres and one of the highlights of the matches played here was Shreyas Iyer’s record breaking 55-ball 147 against Sikkim, the highest Twenty 20 score by an Indian.

Mumbai and Karnataka, the two teams that will clash in the evening match on Friday, were the last to arrive at the stadium to practice under lights.

Mumbai suffered a setback with skipper Ajinkya Rahane pulling out of the team a few days ago owing to a thigh injury and in his absence, Iyer will lead the team.

The teams: Group A: Jharkhand, Gujarat, Railways, Bengal and Maharashtra.

Pakistani cricket legend Javed Miandad is in awe of Virat Kohli’s batting and has picked the India captain as his favourite batsman, saying his record “itself tells a lot”. The former Pakistan captain picked the current India skipper as his favourite due to his “classy” batting. Speaking on his YouTube channel about the talent and […]

Karnataka produced a clinical all-round performance to crush Jharkhand by 123 runs in their Elite Group A clash in the Vijay Hazare Trophy here on Thursday. Pavan Deshpande top-scored with a brisk 70 while Devdutt Padikkal and Manish Pandey made half-centuries as Karnataka made 285 after being put in at the M. Chinnaswamy Stadium. In […]

The Comptroller and Auditor General of India (CAG) has filed an Interlocutory Application in the Supreme Court of India requesting to not be included Source: thehindu.com Related