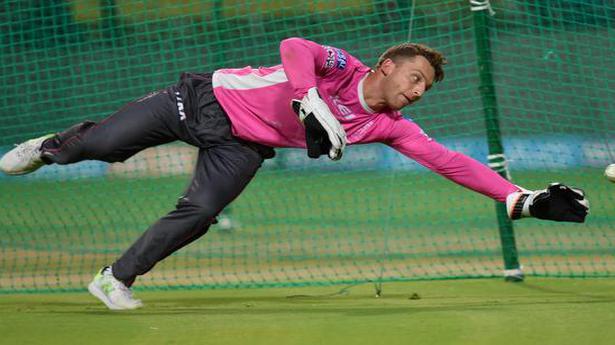 Jos Buttler’s services will no longer be available for Rajasthan Royals at the IPL this year. The dashing opener, easily the team’s best performer for the last couple of seasons, has left for England to attend the birth of his first child.

Buttler was due to leave later this month, but he has had to make changes in the plan after his wife Louise was admitted in the hospital sooner than expected. The Hindu has learnt the England opener had expressed willingness to stay back if the team management wanted him for Saturday’s home match against Mumbai Indians.

And it was Buttler who had led the team to the playoff last year, scoring five fifties in a row. He had to leave the team early last year too, because of national duty. And the Royals badly missed him in the knock-out stage.

They soon would also have to deal with the absence of two other England players, with Jofra Archer, their bowling spearhead, and all-rounder Ben Stokes. The duo is scheduled to leave on April 23, but would be available for the matches against Mumbai Indians and Delhi Capitals.

Among players who will attract extra focus at this edition of the IPL will be Australian run-machine Steve Smith. There had been some talk about an elbow injury, but his captain at Rajasthan Royals, Ajinkya Rahane, said he was fit and available for selection. “It is good to have him back at Rajasthan Royals, where […]

‘Respectfully disagree’ with Gavaskar’s view on selectors and Kohli: Manjrekar

Former India batsman Sanjay Manjrekar has “respectfully disagreed” with Sunil Gavaskar’s critical observations on India captain Virat Kohli and the selection committee, saying integrity is “a far more important quality” than stature for a selector. In his syndicated column, batting great Gavaskar had questioned the process of continuing with Kohli as the captain of the […]

India-B has the last laugh

Medium pacer Sushant Mishra’s opening burst with new ball set up a comfortable 72-run win for India-B over India-A in the final of the Quadrangular under-19 one-day series at the Sports Hub here on Monday. Chasing 233 for a win, India-A was dismissed for 160 runs with Sushant Mishra (four for 41) and off-spinner Karan […]