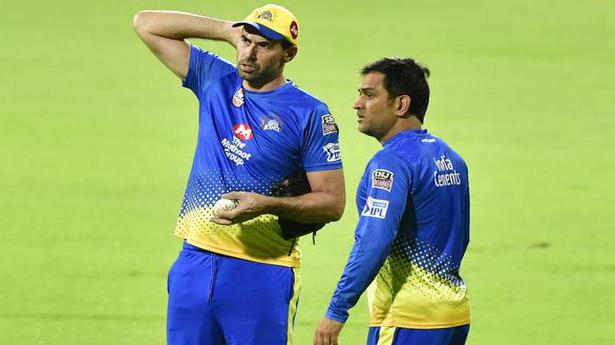 Just when the first objective was in sight, after seven wins from its first eight games, defending champion Chennai Super Kings’ march to the playoffs in Vivo IPL-12 has been halted.

The twin defeats on the road, first to Sunrisers Hyderabad and then Sunday’s agonising one-run loss to Royal Challengers Bangalore, meant the table-toppers are still waiting to seal their place in the final four, which an eighth win should certainly do.

While a 2-2 result after four away matches is not bad, considering the team has been unbeatable on home soil, the last few matches have highlighted a problem the team has been facing since the start of the season — lack of runs at the top. And CSK needs to set that right before it derails the team’s progress further.

On Tuesday, CSK starts a run of three home matches, beginning against SRH and would hope to keep its unbeaten run at home going.

Coach Stephen Fleming had some stern words regarding the top order’s performance after Sunday’s loss. “We have a very talented batting unit but it has been inconsistent.

“On the Chennai pitches, it has been a little bit difficult to find form and we have really struggled in our away games with the bat. We crossed the line today (on Sunday) in terms of playing sensible cricket,” he said.

The numbers say it all. CSK has had only two 50-plus opening partnerships so far with the highest being 79 against Hyderabad in which the batting collapsed after the good start.

CSK is a team that believes in giving its players a long rope but it might now want to think whether Watson and Jadhav need to make way for Sam Billings or M. Vijay, who had a good domestic T20 tournament for Tamil Nadu.

“While we have been able to get seven wins, we are not happy with how we have achieved them. We would like to see some form creeping back into that top-order.”

Hyderabad will come into the game on the back of a two easy wins over CSK and KKR, but will miss the services of skipper Kane Williamson, who has travelled back home for personal reasons.

The team will hope to make the most of Jonny Bairstow (playing his last game this season) and David Warner’s form and availability. The two have scored 962 runs together and Sunrisers has got its campaign back on track after a hiccup in between when it lost three consecutive matches.

That is something the home team would want to avoid on Tuesday.

Kapil Dev expressed delight at the emergence of the fast bowling unit and its increased presence in Team India’s performances. “It is important to give youngsters an opportunity to show their talent,” said the former India all-rounder. He pointed out that a pace attack develops over time. “It takes time (to build a group of […]

India vs Bangladesh T20Is | A series of gains for the hosts

India finished the series on a high, saving its most resilient performance for the third and final T20. The most gratifying aspect of Sunday’s win was that its principal architects were two bowlers with only eight previous T20 internationals between them. Deepak Chahar and Shivam Dube belied their inexperience, hauling India out of a trough […]

Ageing Tigers are roaring in this season’s IPL

It is only April, but it would be safe to say that one of the greatest sporting stories of 2019 has already unfolded at Augusta in the United States. Surely, Tiger Woods winning the Masters, at the age of 43, will take some beating. A few hours before the golfing legend’s extraordinary feat at the […]