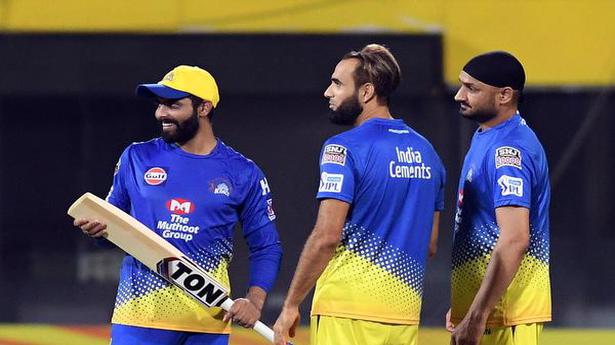 Even though both teams have secured a playoff berth, there is still a lot to fight for when the top two teams on the points table — Delhi Capitals and Chennai Super Kings clash here at the M.A. Chidambaram Stadium on Wednesday.

Despite being the first team to qualify, the home team seems to have lost momentum at the wrong time with three losses in its last four matches, including a big 46-run defeat to Mumbai Indians here on Friday.

A win here is important to finish in the top two for both teams as it will guarantee two chances to reach the final. CSK would want it more, for it will get a chance to play the first qualifier at home.

While the Super Kings’ bowling led by its spinners has played a key role in setting up matches in favourable conditions here, it has come at the cost of the batting unit struggling to adapt to the slow conditions with only skipper M.S. Dhoni being the consistent performer with the bat so far.

With just two more league matches, the batting needs to find its bearings, especially the likes of Ambati Rayudu and Kedar Jadhav who have looked out of sorts in the middle order.

Dhoni who missed the last game here against Mumbai due to fever has not trained the last two days and coach Stephen Fleming said the decision on his availability will be taken only on match day.

In his absence, it becomes imperative that the likes of Suresh Raina, Rayudu and Jadhav step up to the plate, considering Fleming has vowed to back his international players to the hilt despite meagre returns from them so far.

Visitors on a high

Though both teams are on 16 points, with Capitals having the edge on net run rate, the visitors come into the game on a high.

Not only is the team on a three-match winning streak, but it has also secured its first playoff berth since 2012, albeit in a new team name now, which seems to have helped it leave the ghosts of the past behind.

The team has been led admirably by the young Shreyas Iyer with the core batting line-up of Shikhar Dhawan, Rishabh Pant and Prithvi Shaw delivering the goods alongside the skipper.

With the ball, Kagiso Rabada has been the standout performer, leading the pack with 25 wickets, while the likes of Ishant Sharma, Chris Morris and Axar Patel have provided able support.

Though the head-to-head record of 13-6 favours CSK overwhelmingly, the task is cut out for the home team against a confident Delhi side.

The cricketing fraternity with interest in BCCI’s administration and election will get a chance to mull over the probable line-up of the pioneering nine-member Apex Council that will replace, until recently the powerful, Working Committee once the electoral officer N. Goplaswami releases the Draft Electoral Roll at 5 p.m. on Friday. While announcing the election […]

R. Ashwin produced a fighting effort with the bat for Tamil Nadu (79, 206b, 5×4, 2×6) to deny Mumbai a shot at forcing an outright win but could not prevent the visitors from taking the first-innings lead on the final day of play of their Ranji Trophy match here at the M.A. Chidambaram Stadium on […]

Teenage Indian batting sensation Shafali Verma on Monday lost the top spot in the ICC women’s T20 International rankings as she slipped to third after managing only two runs in the World Cup final against Australia in Melbourne. The 16-year-old Shafali (744 points) had grabbed the top spot at the end of the league stage […]