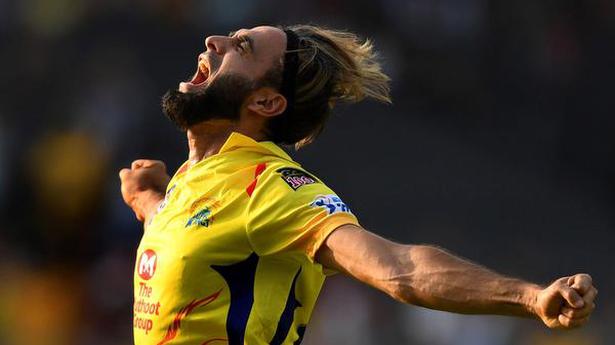 Not for nothing is CSK a serial winner in the IPL. In this edition, the rollicking side already has one foot in the play-offs after its seventh win.

The five-wicket away victory, chasing 162, with two deliveries remaining over Kolkata Knight Riders in an engrossing duel at the packed and electrifying Eden Gardens here on Sunday was well earned by CSK.

In the first half of the match, Imran Tahir bowled with heart and craft to scalp four. There was flight, dip, deception and two-way turn in his bowling.

CSK’s catching in the outfield was outstanding. The vibrant du Plessis held four; a sprinting, diving forward catch at long-off to dismiss Robin Uthappa being sensational.

Then Suresh Raina held centre-stage during the chase even as the KKR bowlers made inroads. When Piyush Chawla pitched short, he cut. When the leg-spinner gave more air, he stepped down to loft the ball straight for a six.

The southpaw pulled, flicked, ran hard and built partnerships during his match-winner unbeaten 58.

The unbroken 41-run sixth-wicket association in 24 deliveries between two the two left-handers, Raina and a rampant Ravindra Jadeja [the latter scored 31 of those], took CSK past the line with two deliveries remaining.

The final onslaught was perfectly timed after Chawla, mixing his googlies with leg-spin and top-spinners, had prised out Ambati Rayudu and Kedar Jadhav and M.S. Dhoni played around a delivery turning into him from the parsimonious Sunil Narine.

In the first half of the match, Man-of-the-Match Tahir dared the batsmen with his flight and revolutions after CSK elected to field.

The duel between Tahir and the big-hitting Andre Russell was exhilarating. Getting the powerful West Indies to mistime a delivery spinning away from him represented CSK’s best chance of dismissing Russell early.

Russell loves to hit the ball between long-on and mid-wicket but to accomplish this against Tahir’s leg-spin, he had to hit against the turn. The West Indian backed himself to strike the ball over long on for the maximum, hitting against turn.

The wily Tahir had laid a trap. The next ball was quicker and a wee bit shorter and had a little more bounce even as it spun away from Russell. The West Indian went for the on-side blow again, the ball struck the top portion of the bat and substitute Dhruv Shorey flung himself forward to hold a terrific catch at long-on.

Shardul Thakur caught the eye with his skiddy pace, control and yorkers.

The heavy hitting Lynn (82) impressed with his incredible bat-speed. He employs his willow like a sledge-hammer, bludgeons the ball. Lynn’s straight hitting and back-foot play — whether hooking or creasing room for inside-out strokes — was exhilarating.

But CSK had the final say.

Having broken the jinx of losing at home last week, Delhi Capitals on Sunday continued the momentum, registering a 16-run victory against Royal Challengers Bangalore. With 16 points in 12 games, it has all but qualified for the playoffs for the first time in seven years. Chasing 188 — which would have equalled the highest-total […]

Aman Hakim Khan picked up four for 42 and Anjdeep Lad four for 47 as Mumbai bowled out Tamil Nadu for 201 in its second innings and won by seven runs on day three of the elite-B match in the Col. C.K. Nayudu trophy (u-23) cricket tournament at the Sharad Pawar Cricket Academy BKC in […]