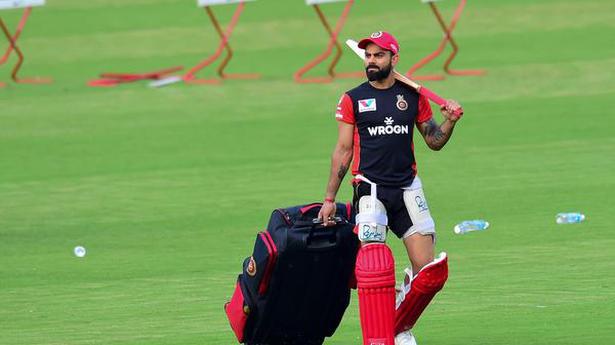 After having been cut down to size by the marauding Andre Russell, RCB will have to pick up the pieces rather quickly as Delhi Capitals comes calling. Another reverse on Sunday at the M. Chinnaswamy Stadium will leave the Virat Kohli-led side on the brink of elimination.

Even as Kohli suggested that the best way to prepare was by leaving his players alone, the skipper will have much to ponder. RCB has always been a top-heavy outfit, and the lifting of the fog which had settled over the side’s batting was a positive from the clash against KKR on Friday. But the side’s death bowling — for long the Achilles heel — was exposed yet again while the fielding showed no signs of improvement.

Kohli himself made the questionable decision of not trying Moeen Ali even for one over. With the likes of Russell batting, no score is safe, but a cue could have been had in the way the KKR spinners, led by Sunil Narine, bowled at the death and delivered against two of the world’s best in A.B. de Villiers and Kohli in a high-scoring ground.

Against Capitals, which too has splendid shot-makers, Kohli will need to be a lot more imaginative. The likes of Prithvi Shaw and Rishabh Pant will relish the conditions in Bengaluru, more so after struggling on the sluggish surfaces back home. “I’ve played a lot over here and it is a good wicket,” said Shaw on match eve. “[We are] not really talking about the opposition, how they are doing or how they are bowling. We are just going to prepare well ourselves. I feel that this wicket is going to be good for batting and we are looking forward to some good runs.”

The Capitals’ form has waxed and waned. The super over win over KKR, masterminded by the brilliant Kagiso Rabada, was no doubt morale-boosting, but the way in which it contrived to lose the plot — versus KKR by letting the match drift and in the subsequent defeat to Kings XI Punjab where it lost seven wickets for eight runs — is concerning. Captain Shreyas Iyer will demand nothing short of a course correction.

Leg-spinner Ravi Bishnoi and left-arm spinner Atharva Ankolekar bowled India to a 44-run win against New Zealand in the ICC Under-19 World Cup here on Friday. India will meet Australia in the Super League quarterfinal at Potchfestroom on January 28. In the rain-hit final Group A match, reduced to 23-overs-per-side, India scored 115 for no […]

Gambhir, finally, gets a stand in his name

The DDCA finally came good on its promise to honour Gautam Gambhir with a stand of his own at the Arun Jaitley Stadium but the entire occasion on Tuesday appeared more of a hurried last-minute decision than a celebration of a two-time World Cup winner. Inaugurated in semi-darkness, with just a flicker of lights and […]

Besides Jasprit Bumrah’s return to competitive cricket after four months, the most significant aspect of the three-match T20I series against Sri Lanka is the face-off between K.L. Rahul and Shikhar Dhawan for the second opener’s position. Stage set for duel With Rohit Sharma rested, Rahul and Dhawan have been presented an opportunity to make their […]