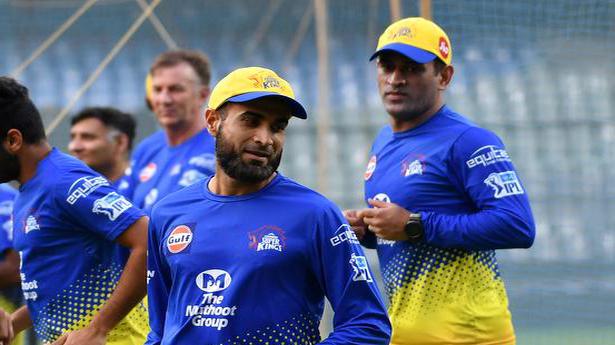 Captain cool MS Dhoni may have been in the eye of criticism for his on-field behaviour recently but for his Chennai Super Kings teammate Imran Tahir, the former India captain remains “a great inspiration“.

In their last match against Rajasthan Royals, Dhoni uncharacteristically lost his cool and rushed on to the field to challenge umpire Ulhas Gandhe’s flip-flop on a no ball.

Former cricketers came down heavily on India’s two-time World Cup-winning captain who escaped a ban and was let off with a fine of 50% of his match fee.

Talking to reporters at the Kolkata leg launch of Dhoni’s global cricket academy, the South African predictably sidestepped on the issue.

“He is a great inspiration for everyone, a great leader and a human being. He is always there to help. That’s what motivates me to join the academy to help the kids,” Tahir said at the launch, avoiding any questions on the issue.

“Even though I have not announced myself globally as part of the MSD Academy, after the World Cup I am free. Even if I have to come to India or go to any place to help the academy, I am willing to do it. I am always there to help the youngsters whenever I can,” said Tahir.

The MS Dhoni Cricket Academy in Kolkata, which has two centres Singapore and one in Dubai, is the 17th branch and first in a metro city in India.

The trial is currently on in the age group of seven to 19 for Kolkata centre which will come up in May in Salt Lake. They also have plans to bring up a centre in Basirhat.

The Indian women’s cricket team completed a 5-0 series whitewash over the West Indies after half-centuries from Veda Krishnamurthy and Jemimah Rodrigues, complemented by the bowlers’ clinical show, steered the side to a 61-run triumph in the fifth and final T20 International here. Jemimah (50) and Veda (57 not out) shared 117 runs for the […]

Opener Janneman Malan struck a sparkling unbeaten century to guide South Africa to a six-wicket win over Australia in the second ODI here on Wednesday which sealed 2-0 victory in the three-match series. Australia, which chose to bat, was all out for 271 as Lungi Ngidi completed career-best figures of six for 58. Malan anchored […]

Longtime teammates Sourav Ganguly and Rahul Dravid will reconnect in Bengaluru on Wednesday as BCCI president and head of National Cricket Academy respectively to discuss the roadmap of Indian cricket’s feeder line. Dravid, who took charge as NCA chief in July, has already drawn a roadmap for the institution and Ganguly is expected to give […]