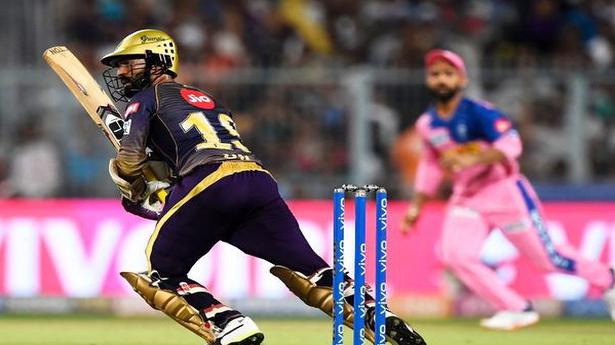 Riyan Parag emerged the unlikely hero as he mounted a late charge to help Rajasthan Royals overcome host Kolkata Knight Riders by three wickets with four balls to spare at the Eden Gardens here on Thursday.

Chasing 176 for victory, Royals appeared heading for another defeat, losing six wickets for 123. But Parag’s defiant 47 off 31 balls, with five boundaries and two sixes, changed the course of the match.

The 17-year-old Assam batsman added 44 off just 21 balls for the seventh wicket with Jofra Archer that gave Royals a crucial win.

Parag’s effort overshadowed a fine unbeaten 97 by KKR captain Dinesh Karthik who helped his side score 175 for six in 20 overs.

Royals managed a good start with Ajinkya Rahane (34) and Sanju Samson (22) putting on 53 for the opening wicket.

Varun Aaron justified his inclusion by sending back KKR opener Chris Lynn with the third delivery of the first over of the match, which happened to be a wicket-maiden too.

KKR slipped into a crisis thereafter as its batsmen failed to tackle the pace battery of Aaron, Oshane Thomas and Jofra Archer, who bowled with discipline while making the most of the assistance from the turf.

Shubman Gill and Nitish Rana soon joined Lynn in the dugout as the host’s batting struggled.

Coming in at No. 4, Karthik struggled initially, failing to go after the Royals attack with the team in a spot of bother at 49 for three after 10 overs.

Karthik, whose previous best this season was 50 against Delhi Capitals at the Ferozeshah Kotla, decided to press the accelerator at this point and scripted a splendid recovery.

With criticism mounting about his batting ability, Karthik, who had scored three off the first 10 balls he faced, played a hurricane innings, striking seven fours and nine sixes in his 50-ball knock.

The KKR skipper worked on the team’s revival in the company of Sunil Narine. The two scored 31 runs off seven balls after the team’s sedate start.

Though Karthik was stranded three runs short of his maiden T20 century, his knock had determination and class written over it.

Captains who make bold moves are often rewarded and, on Sunday afternoon, Vidarbha skipper Ganesh Satish, defending a modest total of 143, was called upon to make a tactical move on a dry surface in a Group B Super League match of the Syed Mushtaq Ali Trophy T20 tournament at the scenic Emerald Heights international […]