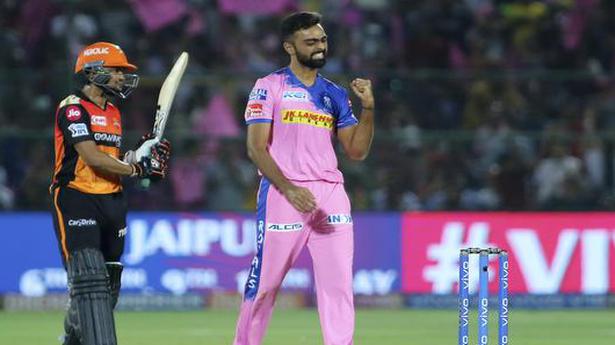 Eyebrows were raised when Rajasthan Royals paid ₹8.4 crore to retain the services of Jaydev Unadkat. The left-arm seamer did little to bring those eyebrows down to their normal positions this IPL — until Saturday night, that is.

Against Sunrisers Hyderabad, he gave away just 26 runs and picked up two wickets, not to mention three catches, one off his own bowling. It was easily his biggest contribution to the Royals yet this season and he was also named Man-of-the-Match.

More than happiness, it was relief that his large, expressive eyes conveyed after the Royals completed a commanding seven-wicket win. For someone who had given away far too many runs for too few wickets, a performance like that could not have any sooner.

“I cannot express how much I needed this for my own confidence,” Unadkat admitted. “Times have been tough but I have become stronger and tougher as a player.”

He said the T20 format was tough for a bowler. “You cannot expect you will win matches as a bowler in every single game,” he said. “But as long as you contribute to the team it is fine… I am happy that the results finally came.”

Apart from Unadkat’s much-delayed return to form, what should gladden the Royals is the way they coped with the exit of England players. This was their first game after the departure of Jofra Archer, their bowling spearhead, and Ben Stokes, while their best player of the tournament Jos Buttler had left a week earlier.

Yet, the team has regrouped extremely well, to post its fourth win in six games and keep alive its hopes of the playoffs. Liam Livingstone shone particularly in his role as the opener, making 44 off just 26 balls, in only his second game of the season.

“His role was to go and take advantage in the PowerPlay,” said Unadkat. “We have more players leaving, compared to other teams, but we have the bench strength.”

Star cricketer Virat Kohli remains the sole Indian in the Forbes list of world’s highest-paid athletes with estimated annual earnings of $25 million. However, the Indian captain has dropped 17 spots to 100th in the rankings. The list is headed by Barcelona and Argentina football superstar Lionel Messi. According to the Forbes list announced on […]

It wouldn’t be a wrong to say no one player wields as much an influence on a team’s fortunes as Mahendra Singh Dhoni does on Chennai Super Kings this year in the IPL and he showed on Wednesday why he is so vital to the team’s fortunes. After missing the last game against Mumbai Indians […]