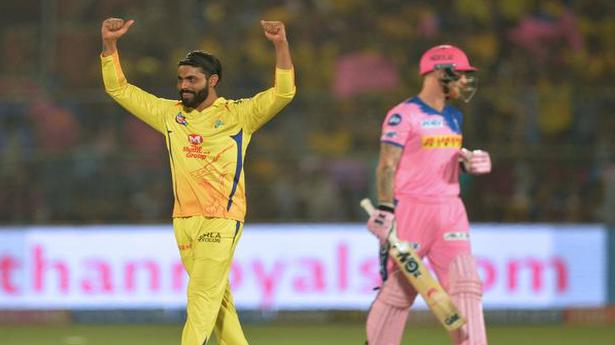 Less than 24 hours after Alzarri Joseph scampered a two off the final ball to give Mumbai Indians a thrilling win over Kings XI Punjab, Mitchell Santner smashed a six off the final delivery to script an incredible win for Chennai Super Kings over Rajasthan Royals at the Sawai Mansingh Stadium on Thursday.

The defending champion had needed three off the last ball, when Santner, playing only his second match of the season, lofted Ben Stokes over long-on. The final over, from which Chennai had required 18, also saw some controversy with the CSK captain M.S. Dhoni running on to the field to argue with the umpire over a no-ball.

This was also Dhoni’s 100th win in the IPL as captain, the first to achieve the feat. The match also had another Chennai player reaching a milestone as Ravindra Jadeja took his 100th wicket.

Chasing a target of 152, CSK was reeling at 24 for four in the sixth over when Dhoni and Rayudu came together. Some superb bowling by the Royals’ seamers and brilliant fielding had put CSK under pressure.

Earlier, Royals, put in, went for the big shots from the start, learning from their mistakes in the last game.

Openers Jos Buttler and Ajinkya Rahane seemed to be in a hurry indeed. The England wicketkeeper sweetly timed the third ball of the innings, bowled by Deepak Chahar, through midwicket for a boundary.

A ball later, off the back foot, Buttler lifted the bowler — who had delivered an IPL record-breaking 20 dot balls against KKR — over his head for a six. Rahane was in no mood to play second fiddle and hit Santner over the infield, on either side, off successive balls for fours.

The skipper, however, didn’t last long. He played across the line and was trapped lbw by Chahar; it proved an excellent decision by the bowler and Dhoni to go for the review.

Buttler went in the very next over. After sending Shardul Thakur’s first three balls to the boundary, he tried to hit him over the off-side and skied a catch to extra-cover.

Sanju Samson could not do much on his return after missing the last two games due to injury, sweeping Santner to substitute Dhruv Shorey, who completed the catch after a bit of juggling.

It took a rearguard action by Stokes, who top-scored with 28, and Shreyas Gopal, who smashed 19 not out off just seven balls, to bring some joy to the Royals camp.

However, it was Dhoni’s men who had the last laugh, thanks to the skipper and Santner.

West Indies tour a great opportunity for Pant to unleash his potential: Kohli

The time has come for Rishabh Pant to “unleash” his rich potential in all three formats, said India captain Virat Kohli ahead of the first T20 international against the West Indies on August 3. With little clarity over the future of veteran M.S. Dhoni, Pant has now become the preferred choice in all three formats […]

Australian coach Justin Langer Tuesday welcomed the top-order selection dilemma posed by the return of David Warner as offering “fantastic flexibility” to the team ahead of the World Cup. The return of Steve Smith and Warner from their year-long bans for ball-tampering has left selectors in a quandary, with openers Aaron Finch and Usman Khawaja […]