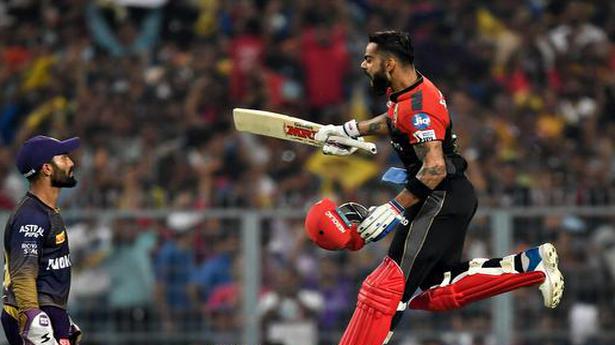 Like a master storyteller scripting stories of varied colours, Virat Kohli manufactured another match-winning hundred of a different shade that culminated in Royal Challengers Bangalore’s 10-run victory over Kolkata Knight Riders in the Indian Premier League at the Eden Gardens here on Friday.

Kohli’s fifth IPL century catapulted RCB to 213 for three, its highest aggregate of the season, before the touring side managed to blunt KKR’s late charge, led by a defiant 118-run stand off 48 balls by Nitish Rana and Andre Russell, and stayed alive in the league.

Kohli’s gritty innings had two distinct parts. He stayed put through a scratchy start, highlighted by a few edges falling short of fielders and others running to the boundary, before savaging the home attack to the best of his ability.

Following the departure of Parthiv Patel in the fourth over, Kohli’s 31-ball 41-run stand with Akshdeep Nath shielded RCB from pressure.

Russell captured Akshdeep in the ninth over to tighten KKR’s grip, but Kohli formed another invaluable 90-run partnership, off only 43 balls, with Moeen Ali (66 off 28) to swing the momentum in favour of the visitors.

For a change Kohli took the back seat, while Moeen displayed his clean hits to plunder five fours and six sixes, four of them on the onside, and upset KKR’s plans.

The English all-rounder was severe on a clueless Kuldeep Yadav, who gave away 27 runs — including three sixes and two fours — in his last over.

Kohli took charge after Moeen’s fall — who top-edged Kuldeep’s last delivery — and stole the match from KKR’s grasp by playing some great shots.

The RCB captain, who gathered his first 50 runs off 40 deliveries, got his second off just 17 balls, studded with five fours and three sixes.

Kohli, who ruled all over the park forcing the 60,000 spectators to change loyalty, hit Harry Gurney for a four on the legside to score his first hundred of the season off the penultimate ball of the RCB innings before holing out to Shubman Gill at deep mid-wicket.

RCB started well with the ball as Dale Steyn, returning to the team after nine years, swung the ball impressively to dismiss Chris Lynn and Gill reducing KKR to 33 for three in the fifth over.

With Rana and Russell bludgeoning the ball at will, fours and sixes rained from both ends like a video game.

However, the duo could not help KKR overhaul the stiff target.

BCCI president Sourav Ganguly on Saturday said Mahendra Singh Dhoni has “surely” communicated his future plans to India captain Virat Kohli and selectors. Dhoni has been on a sabbatical from international cricket since India’s semi-final exit in the ODI World Cup, leading to speculations about his future. “He’s had communication with the captain, I am […]

Gujarat’s biggest festival, Navaratri, is here. It celebrates Goddess Durga on nine successive nights in the most colourful of styles, with some spectacular dances. It is only apt that a women’s T20 International series is being staged here during the celebration of feminine power. What isn’t, is the weather! Two matches in a series of […]

The Board of Control for Cricket in India (BCCI) has announced that it will contribute ₹51 crore to the Prime Minister Citizen Assistance and Relief in Emergency Situations (PM-CARES) Fund. According to a statement issued by the BCCI, president Sourav Ganguly and secretary Jay Shah discussed the issue with other office-bearers and State associations before […]