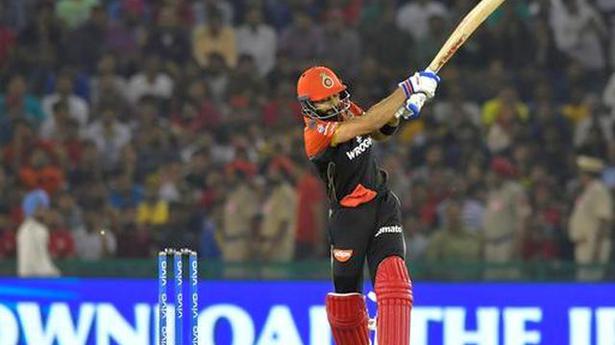 It was just the kind of script that was expected to end Royal Challengers Bangalore’s sequence of defeats this season.

The mantra for RCB was simple — win the toss, elect to field and chase down the target. Skipper Virat Kohli did everything right on these counts. His 67 and the 85-run second-wicket stand with Man-of-the-Match AB de Villiers shut out Kings XI Punjab, thereby opening the team’s tally with an emphatic eight-wicket win.

For the record, like Delhi Daredevils (now Delhi Capitals) in 2013, Bangalore’s run of defeats from the start of a season stopped at six.

The target of 174, built on Chris Gayle’s unbeaten 99, was far from intimidating on this ground and conditions. This evening, much more than dew, Kings XI had to deal with a duo known for its destructive powers.

In the process, the Kohli-de Villiers pair also became the most successful in IPL. Kohli and Chris Gayle held the previous record of 2787 runs.

When Kohli departed, 46 runs were needed off 4.3 overs. Marcus Stoinis, after being dropped at 14 by M. Ashwin, kept de Villiers’ company and ensured Bangalore’s victory. The genius of de Villiers was on display during his well-composed 59.

Earlier, Gayle was back to doing what he does best. There was no sign of back-spasms that kept him off the field when Mumbai Indians batted at home earlier this week. With Bangalore opting to keep the spinners out of powerplay, Gayle treated comeback-man Umesh Yadav and Siraj Mohammad with disdain and smashed 48 runs during the first six overs that produced 60 runs.

Before long, three of Gayle’s ex-RCB colleagues — K. L. Rahul, Mayank Agarwal and Sarfaraz Khan — departed. By sheer coincidence, each of these in-form batsmen hit a six and exited off the next ball!

Had Bangalore reviewed for a leg-before decision off the fifth ball of the innings, Gayle would have been out for a duck off Umesh. Again on 83, Gayle was lucky when Kohli, running forward, dropped a low catch at long-on, again off Umesh.

Gayle blitzed against Siraj and Umesh and again waited for them to return at the business end of the innings. Against the spin of Yuzuvendra Chahal and Moeen Ali, Gayle was circumspect.

For the statistically inclined, Gayle’s innings was built on only 20 scoring strokes. He smashed 82 runs (nine 4s and five 6s) off 41 deliveries of pace and 17 runs (one 4), off 23 balls of spin.

With none of the other batsmen making a sizeable contribution, Gayle carrying the bat did not result in what could be considered a match-winning total. Indeed, it was not.

Pant and Dhawan likely for Delhi

Delhi cricket got a shot in the arm ahead of the upcoming Vijay Hazare Tropy after three top India players made themselves available for the competition on Tuesday. The three — Rishabh Pant, Shikhar Dhawan and Navdeep Saini —are currently part of the Indian side for the three-match T20 series against South Africa, the first […]

The city of joy gears up

The City of Joy is gearing up to host the first-ever pink ball day-night Test match at the Eden Gardens here. The Cricket Association of Bengal (CAB) has joined hands with Creocraft to give life to the Eden’s walls, which will tell the story of a cricketer and his journey from the maidan to the […]