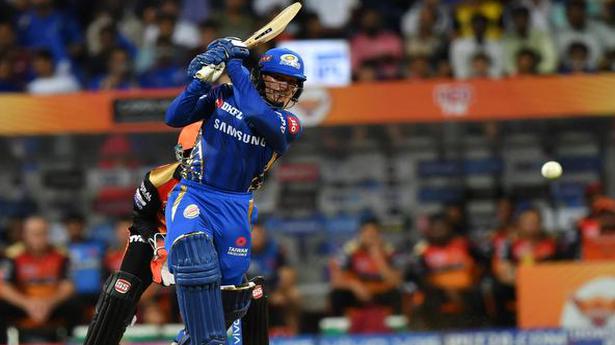 Manish Pandey not only timed the ball to perfection but even timed his onslaught to precision to stretch the must-win match for Sunrisers Hyderabad into a Super Over. But Jasprit Bumrah came back sharply in the one-over eliminator to help Mumbai Indians pocket the vital two points and seal a berth in the Indian Premier League Playoffs.

With Pandey attempting a suicidal second run off the first ball of the elimiator and Bumrah sneaking through Mohammad Nabi’s defence off the fourth, Mumbai Indians required nine runs to win the Super Over.

Hardik Pandya’s six over long-off off leggie Rashid Khan took the fizz out of the chase and the Mumbai Indians required just three balls to score nine runs.

The nail-biting win meant Mumbai Indians will definitely feature in the Playoffs next week, while the loss meant Sunrisers will have to beat Royal Challengers Bangalore in their last game to qualify.

For a better part of Sunrisers’ chase of 163, Jasprit Bumrah, despite two loose deliveries to end the penultimate over, was consonant as ever. Lasith Malinga’s toe-crushers were in sync with the loud cheers by the local fan army. And the spin twins of Krunal Pandya and Rahul Chahar were phenomenal in the middle overs.

However, Pandey — who outshone Quinton de Kock in terms of playing the knock of the night — turned out to be the difference.

In the 17th over, Pandey’s straight boundary off Bumrah helped him raise his half-century and keep Sunrisers in the hunt with 41 required off the last three overs.

With Mohammad Nabi clearing the boundary once off Malinga, Pandey waited till the last two balls of the 19th over to go after Bumrah. And his successive fours through on-side meant Sunrisers needed 17 off Hardik’s last over.

Nabi’s six off the third ball brought the target down to to eight off three but the Afghanistan all-rounder was dismissed off the next. Pandey then ran two before clearing long-on with seven required off the last ball to ensure Wankhede Stadium witnessed its first Super Over.

In the end, his heroics were far from enough for the visitor. All it can do is to take heart from Pandey’s powerpacked show in the chase and a respectable effort with the ball early on in the match that restricted Mumbai Indians to 162 for five in the first innings.

Sri Lanka to go ahead with Pakistan tour

Sri Lanka Cricket on Thursday said it would go ahead with the tour of Pakistan despite fears that players could be targets of terror attacks during the six-match visit. SLC secretary Mohan de Silva said they received the all-clear from the defence ministry to leave for Pakistan on Tuesday. “We have the green light from […]

Rishabh Pant’s poor shot selection has caused his downfall more often than not and Virender Sehwag on Monday hoped the keeper-batsman “works to better his game” and justify the team management’s faith. The 21-year-old Pant is being seen as Mahendra Singh Dhoni’s successor across formats but of late has been criticised for his shot selection […]

The Ranji Trophy is approaching its business end and the race for the quarterfinal berths is heating up. In the ninth and final round, beginning on Wednesday, Punjab takes on Bengal at the Dhruve Pandove Stadium here. Bengal (26 points) is fourth on the combined Elite A and B table with Uttar Pradesh, Punjab and […]