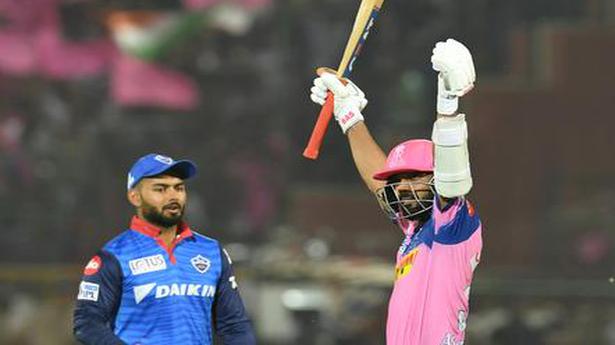 It is not every night that a sparkling hundred in a T20 game gets overshadowed and becomes inconsequential. But, then, with Rishabh Pant, anything is possible.

The 21-year-old left-hander played a blistering knock (78 not out, 36b) to lead Delhi Capitals to a six-wicket win with four balls to spare. With the fifth away in six games, Delhi also moved to the top of the table.

The Royals may have felt their 191 for six — 32 more than the average first-innings score here this year — was good enough. Opener Ajinkya Rahane’s 105 not out off 63 balls would have been a match-winning effort in most games, but not on a night when Pant finds his form.

The Delhi wicket-keeper had walked in after his team lost the wickets of opener Shikhar Dhawan (54, 27b) and captain Shreyas Iyer. At 77 for two in 8.5 overs, the match was well poised.

Pant added 84 for the third wicket with Prithvi Shaw, who took good advantage of the catch spilled by Ashton Turner when he was on 10 as he went on to make 42 before he fell to Shreyas Gopal. The Royals’ hopes were revived when Sherfane Rutherford was dismissed by Dhawal Kulkarni in the next over.

At the end of the 18th over, Delhi was 175 for four — exactly what Rajasthan was at the same stage.

But, Pant dispatched Jofra Archer’s last ball in the 19th over long-on for a six.

Now, the Capitals needed just six from the last over. After Colin Ingram took a single off the first ball, Pant pulled Jayadev Unadkat over mid-wicket for a six to finish off the Capials’ fine chase in style.

Earlier, Rahane had to see his opening partner Sanju Samson getting run out without facing a ball and the catch he offered, while trying to sweep Axar Patel, being put down at short fine leg by Ishant Sharma.

He rubbed salt into Axar’s wound, hitting him for a straight six the very next ball. In the following over, he treated Rabada — the leading wicket-taker in the IPL — the same way, for the same outcome.

Later on, he would send Chris Morris also into the stands. Rahane’s batting is about timing and place. It was no different this night.

He received excellent support from Smith (50), as the duo added 130 off 72 balls. But his dismissal would prove a setback for his team.

Among the four wickets they lost inside the last five overs was that of Turner, who was out for his third golden duck. Quite a turnaround for the Australian, whose came up with an astoshising knock on his last visit to India .

‘These boys really made us proud’

Thousands of ecstatic fans celebrated on the streets and a stadium crowd screamed “we are the champions” as Bangladesh returned home to a hero’s welcome on Wednesday after winning the ICC Under-19 Cricket World Cup. It stunned four-time winner India in the final on Sunday in Potchefstroom. A flight carrying the players landed at Dhaka’s […]

There wasn’t a great deal of resistance from South Africa’s top order in Pune. It cannot have been easy in the first innings, to field for nearly two full days in the Indian sun, watch the runs pile up interminably, and then face down a hungry bowling attack as it tore in. By the third […]

Kohli: Can see a cultural shift in the last two, three years in Indian cricket

India captain Virat Kohli on Saturday spoke like a statesman when he revealed what message he sent across to his team ahead of the year’s first assignment, the T20 series opener against Sri Lanka at the ACA Stadium, Barsapara, here on Sunday. In his first address to his team mates in the New Year, prior […]