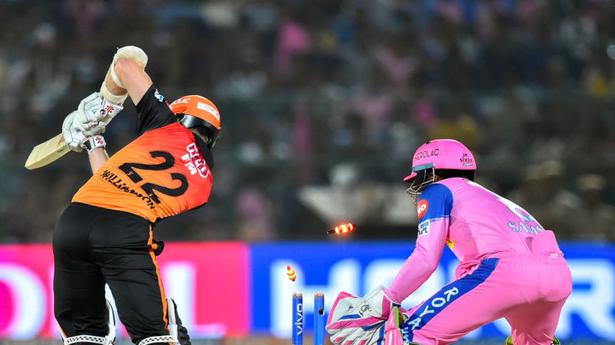 No Jofra Archer. No Ben Stokes. No Jos Buttler. No worries… — the statement was loud from Rajasthan Royals on Saturday night.

It was even louder than the happy noise made by the loyal fans right through the match at the Sawai Mansingh Stadium.

The seven-wicket victory over Sunrisers Hyderabad proved quite an important one — not just for the Royals, but the Chennai Super Kings as well; M.S. Dhoni’s men, with 16 points, have confirmed their place in the Playoffs.

Royals, despite scoring their fourth win in six games, are still long way from that stage, though. But, they are alive and kicking.

And they seemed happy to have finished off their campaign at home with a win, which was achieved by a fine effort with the ball — indifferent fielding notwithstanding — followed by a neatly-executed chase.

The target of 161 was achieved with five balls to spare, with Sanju Samson (48 not out) and Ashton Turner, who finally managed to score a run after three successive ducks in IPL, at the wicket.

The chase was given a solid start by Ajinkya Rahane, whose two sixes over mid-wicket off Rashid Khan in the third over set the tone, and Liam Livingstone, who was playing only his second match.

Earlier, Royals chose to field and managed to check the visitors’ score, though catches were dropped and the ground fielding was shoddy.

The very first ball brought a big smile to David Warner’s face; the single off Varun Aaron was turned into five by an overthrow. It got only worse as the visitors were able to score 51 in the PowerPlay, for the loss of Ken Williamson’s wicket.

The captain was beaten by a Shreyas Gopal googly, which hit his pad before disturbing the stumps. The next man, Manish Pandey, however, carried on from where he left off in the last match (against CSK), making 61 off 36 balls.

He added 75 for the second wicket with the orange-cap wearing David Warner, who played an uncharacteristically subdued innings. He didn’t hit a single boundary in his 32-ball 37.

But it took a brilliant catch to dismiss him, though. His fellow-Australian Steve Smith ran along near the off-side boundary, dived forward and caught the ball at full stretch.

Given the virtually non-existent middle-order of SRH this season, the onus was now on Pandey to take the side to a safe score. But he was done in by a smart piece of stumping by Samson off Shreyas.

Wickets then continued to tumble, but a late onslaught by Rashid Khan, who hit the last ball of the innings for a six, took the SRH run-rate to eight. That just wasn’t enough against a team that is rediscovering itself.

Royals won by seven wickets with five balls to spare.

IPL 2019: Rahane roars back with century, powers Rajasthan Royals to 191/6

It is not every night that a sparkling hundred in a T20 game gets overshadowed and becomes inconsequential. But, then, with Rishabh Pant, anything is possible. The 21-year-old left-hander played a blistering knock (78 not out, 36b) to lead Delhi Capitals to a six-wicket win with four balls to spare. With the fifth away in […]

Relevance and context. These are the oft-used terms when it comes to discussing the fate of Test cricket in an era of instant results. When it comes to the 86th Ranji Trophy, which starts on Monday with 19 matches scheduled at various nooks and corners of the country in the opening league round, one can’t […]