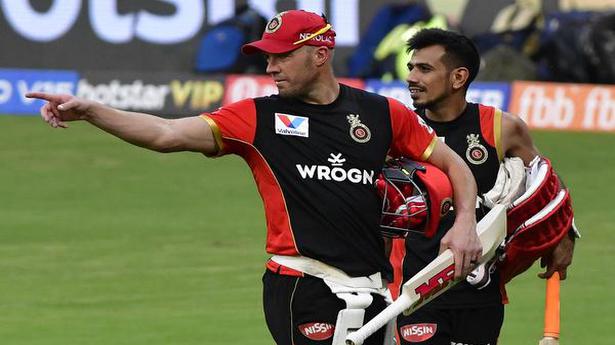 It was better, Virat Kohli said after Royal Challengers Bangalore’s embarrassing seven-wicket defeat in Chennai, to have got a game like that “out of the way early on”.

It was not possible, Kohli seemed to be suggesting, for all of his batsmen to fail at the same time again. Some may consider such optimism excessive but in its second game at least, against Mumbai Indians here on Thursday, RCB has reason to be confident of a better batting performance.

The slow turner rolled out at Chepauk was far from conducive to stroke-making, with both sides critical of the pitch afterwards. The surface at the M. Chinnaswamy Stadium, though, is expected to be vastly different.

Kohli’s eyes lit up at the toss for India’s second T20I against Australia here last month, when he gushed about the pitch resembling the “Bangalore wicket of old”. Last week, Yuzvendra Chahal predicted average scores of “190-200” for the season.

For all the challenges the pitch in Chennai posed, RCB can have few excuses after getting knocked over for 70. Any little encouragement has to be derived from the team’s effort in the field, when it took the game as deep as the 18th over.

Kohli will not have learnt much from that contest; it remains to be seen if he persists with the same combination or gives the likes of Washington Sundar a chance.

RCB will be wary of Mumbai, which also began the season with defeat. Delhi Capitals’ Rishabh Pant was unstoppable that evening but there were positive signs for Rohit Sharma’s side. The captain and Quinton de Kock managed a good start.

Yuvraj Singh, who had made only one score over 50 for Punjab (across formats) this domestic season, struck a 35-ball-53. Kieron Pollard and Krunal Pandya also made a mark.

Jasprit Bumrah, who injured his left shoulder during the game, bowled in the nets without any visible discomfort on Wednesday. He would be assessed afterwards, a Mumbai official stated, but the signs are good.

Lasith Malinga, who has been cleared to take part in the IPL by Sri Lanka Cricket, was expected to land late in the evening.

If the pitch behaves like it is expected to, the crowds will be greatly entertained. As they await a first home game of the season, the RCB faithful will hope — like every year — that this time the trophy is theirs.

IND vs WI: Pollard is a smart and confident leader, says Rohit Sharma

These are early days for Kieron Pollard as captain of the West Indies’ white-ball cricket team. After an undistinguished start, losing the Twenty20 series 2-1 to Afghanistan in Lucknow recently, the 32-year-old Trinidadian led his team to a 3-0 win in the ODI series. All along the all-rounder, who has lit up many an IPL […]

A confident Aiden Markram (83 batting, 140b, 12×4) held firm even as South Africa-A crumbled against India-A on the second day of the second ‘Test’, at SDNR Wadiyar Stadium here on Wednesday. South Africa-A limped to 159 for five, 258 runs behind India-A’s first innings total of 417. Markram, part of the senior Test side […]

Mike Hesson on Thursday announced he has parted ways with IPL franchise Kings XI Punjab, lending credence to the speculation that the New Zealander is also in contention to be India’s next chief coach. The local media in New Zealand reported that Hesson has applied for the top job in both India and Pakistan. Former […]