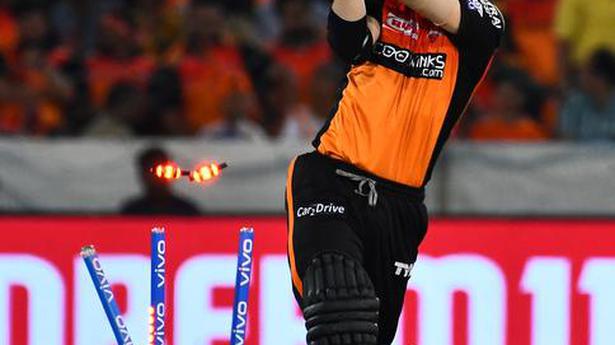 A dream debut by the 22-year-old Alzarri Joseph fashioned Mumbai Indians’ remarkable 40-run win over Sunrisers Hyderabad in their IPL contest at the Rajiv Gandhi Stadium here on Saturday.

The West Indies speedster finished with stunning figures of 3.4-1-12-6, the best in the IPL, bettering Sohail Tanvir’s six for 14 for Rajasthan Royals against Chennai Super Kings in the 2008 edition.

Sunrisers’ fragile middle-order stood exposed once the big guns failed at the top. For the first time in this edition, Sunrisers lost the explosive opening pair in the PowerPlay overs.

The host was reduced to 39 for two after Jonny Bairstow sliced leg-spinner Rahul Chahar to point and David Warner was bowled off the inside edge in Joseph’s first over in the IPL.

Manish Pandey failed to thrive on the dropped chance — Kieron Pollard floored a sitter at long-off off Rahul Chahar when the batsman was on zero. He fell for 16. Yusuf Pathan was dismissed for a four-ball duck by Chahar.

Joseph struck a double blow in the 16th over, removing Deepak Hooda and Rashid Khan to push the home team to the brink.

Skipper Rohit Sharma, who was dropped on zero by Kaul at third-man off the fifth ball of the innings off Bhuvneshwar, perished soon, falling to off-spinner Nabi.

Seamer Sandeep Sharma trapped Suryakumar Yadav in front and Kaul sent back Quinton de Kock whose lofted shot went straight to the fielder in the deep.

The big-hitting Pollard’s brilliant onslaught, which included a one-handed six over long-off off Kaul, propelled the side to 136 for seven, a total that looked impossible at one stage.

Kaul and Bhuvneshwar leaked 39 in the final two overs as Mumbai won by 40 runs.

Scoring 300 in any kind of cricket is great: Vengsarkar on Sarfaraz

Former India captain Dilip Vengsarkar on Thursday heaped praise on young batsman Sarfaraz Khan for notching up an unbeaten triple hundred in their drawn Ranji Trophy game against Uttar Pradesh. Sarfaraz, who returned to Mumbai after playing for UP, on Wednesday slammed 301 off 391 to help the 41-time Ranji Trophy champions overhaul UP’s first […]

IPL 2019: Mumbai Indians makes the grade with Super Over win

Manish Pandey not only timed the ball to perfection but even timed his onslaught to precision to stretch the must-win match for Sunrisers Hyderabad into a Super Over. But Jasprit Bumrah came back sharply in the one-over eliminator to help Mumbai Indians pocket the vital two points and seal a berth in the Indian Premier […]