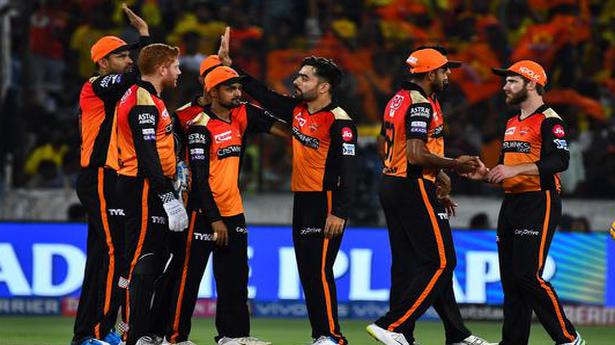 It is the business-end of the Vivo IPL 2019 and with the overseas players scheduled to leave in order to join their respective national teams for World Cup commitments from next week, the franchises should be doubly keen to make optimum use of their availability in the next few games.

In this context, Sunrisers Hyderabad tops the list when it takes on Kolkata Knight Riders in a high-voltage contest at the Rajiv Gandhi Stadium here on Sunday,

Dinesh Karthik-led Knight Riders badly needs a win here against the home team which has regained the confidence after an impressive win against Chennai Super Kings (minus injured M.S. Dhoni).

But, what should be a real concern for Karthik is that the top three — Chris Lynn, Sunil Narine and Robin Uthappa — should fire ahead of the classy Rana and the big-hitting Russel who were involved in a gallant chase in vain against Royal Challengers Bangalore in the previous game.

KKR is banking too heavily on Russel who is also battling discomfort in his left wrist. He failed in only one innings in this edition and even in a T20 game, it is too much to ask one player to come good every time. An exciting contest should be on between Russel and leg-spinner Rashid Khan.

The other worry for Karthik can be the way wrist-spinner Kuldeep Yadav was hit all over in the previous game.

If KKR were to make serious amends, the onus is on the bowlers against a line-up which has some explosive batsmen at the top like this edition’s leading scorer David Warner and the consistent Jonny Bairstow.

SRH badly needs Williamson to come good at No. 3 should the law of averages catch up with the opening pair.

In bowling, SRH has the depth and variety and, more importantly, got back the confidence after the early disappointments in this edition.

Aiden Markram made the most of the chance to bat to score his second century on this tour (100 retired hurt) and take South Africa to 199 for four at close of the second day’s play against Board President’s XI at the Dr. PVG Raju Sports Complex here on Friday. Bad light stopped play immediately […]

Like a master storyteller scripting stories of varied colours, Virat Kohli manufactured another match-winning hundred of a different shade that culminated in Royal Challengers Bangalore’s 10-run victory over Kolkata Knight Riders in the Indian Premier League at the Eden Gardens here on Friday. Kohli’s fifth IPL century catapulted RCB to 213 for three, its highest […]

Warner and Smith in quest of World Cup spots

The Indian Premier League (IPL) may not prove to be an ideal platform for India cricketers to stake a claim for a World Cup spot, but for David Warner and Steven Smith — the two Australians returning to top-flight cricket after serving suspension for their involvement in Sandpaper-gate — the tournament will be a big […]