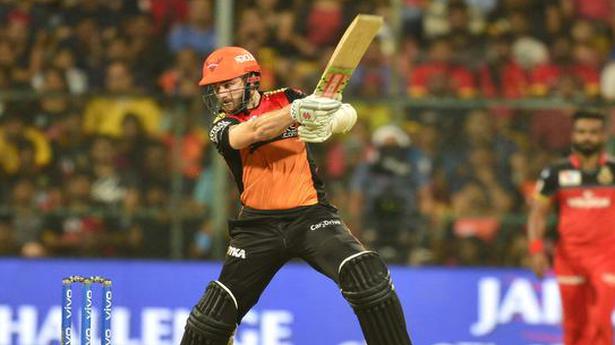 Sunrisers Hyderabad’s passage to the IPL playoffs will now hinge on results elsewhere as it lost to Royal Challengers Bangalore by four wickets in its final league match at the M. Chinnaswamy Stadium here on Saturday.

After setting a target of 176, SRH seemed primed to defend it, reducing RCB to 20 for three with Parthiv Patel, Virat Kohli and A.B. de Villiers back in the pavilion.

It did help that Yusuf Pathan dropped a sitter off Bhuvneshwar Kumar at point when Hetmyer was on 60 with another 62 required. But for that, the West Indian’s batting was clutter-free, as he finally delivered on his immense potential.

Each of his six sixes came on the leg-side and he was particularly severe on spinner Rashid Khan.

Gurkeerat, on the other hand, played the perfect second fiddle, displaying a fine array of shots in the latter part of his innings.

When the two were dismissed within three runs of each other, there were a few jitters, before Umesh Yadav, with six needed off six, smacked the first two balls of the final over to the fence.

Earlier, after being put in, Sunrisers scored in spurts. Umesh bowled a fine opening over giving away just two runs, but Navdeep Saini was hit for 19 in the second, with Martin Guptill’s straight six over the bowler’s head standing out.

When Wriddhiman Saha, the Kiwi’s partner, welcomed Yuzvendra Chahal with three consecutive fours, the visitors looked set for a big score. But Saini changed ends and struck immediately, as Saha was out caught at mid-on.

Then Washington Sundar dealt a double blow, dismissing both Guptill and the in-form Manish Pandey. Guptill’s dismissal, in particular, was tame, as he chipped a short ball straight to short mid-wicket.

Vijay Shankar missed out on another opportunity to convince as Sunrisers laboured through the middle overs. It was left to skipper Kane Williamson (70, 43b, 5×4, 4×6) to shoulder the burden and when he hit Kulwant Khejroliya for two sixes in the 15th over — one over deep square and the other over mid-wicket — he seemed up for it.

Three quick wickets almost derailed SRH’s death-overs flourish, but Umesh’s ordinary last over ensured a competitive total. Williamson, who was not his usual fluent self, hit 23 of the 28 runs scored, including two sixes and two fours off the first four balls.

To make matters worse, Umesh was adjudged to have also overstepped off the fifth delivery by umpire Nigel Llong, when replays suggested he hadn’t. But it was to RCB’s credit that it didn’t let the lapses prove costly.

New Zealand Cricket bosses said on Monday that they will personally apologise to England fast bowler Jofra Archer after he was racially abused during the first Test here. The Barbados-born Archer, considered one of the most promising all-rounders in world cricket, tweeted that he was disturbed to hear racial insults “whilst battling to help save […]

Jofra Archer removed Australia opener Marcus Harris to leave Australia on 12-1 at lunch as rained hampered the start of the third Ashes test at Headingley on Thursday. Play got under way late in damp conditions in West Yorkshire, with Stuart Broad and Archer bowling well, Broad almost tempting David Warner into edging the ball […]

Kieron Pollard walked out for the toss after the regular Mumbai Indians captain, Rohit Sharma, had to sit out due to a hamstring injury. Pollard won the toss and decided to bowl first. For Mumbai, Siddesh Lad replaced Rohit. Kings XI Punjab made two changes, bringing in Hardus Viljoen and Karun Nair for Mujeeb-ur-Rahman and […]