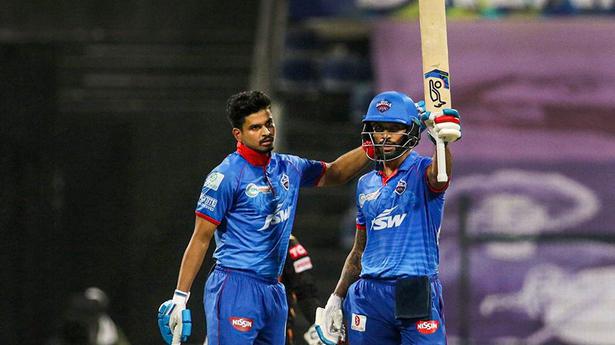 The opener’s 78, all-round effort from the Australian and the South African’s four-for seal it in favour of Shreyas’ side; Williamson’s effort goes in vain for Sunrisers.

Delhi Capitals entered its maiden IPL final with a 17-run win over Sunrisers Hyderabad at the Sheikh Zayed Stadium in Abu Dhabi on Sunday.

But it was a day on which every strategic punt by Shreyas Iyer and Ricky Ponting paid off; be it in bringing in Shimron Hetmyer for Prithvi Shaw or promoting Marcus Stoinis — a bright spot from the defeat to Mumbai Indians — as an opener or bowling the Aussie (3-0-26-3) in the PowerPlay.

It brought Williamson and Jason Holder together and the former was at his delightful best, hitting a six each off Pravin Dubey, Rabada, Axar Patel and Stoinis. But Jason Holder’s dismissal ended the 46-run fourth-wicket stand, leaving Williamson with a lot to do.

With 77 needed off 36 balls, Abdul Samad caned Anrich Nortje for a six and two fours. But Stoinis’ dismissal of Williamson in the 17th over proved fatal for SRH.

In the third, Stoinis, on three, was dropped by Holder at short mid-on off Sandeep Sharma.

It seemed to liberate Stoinis, as he hit Sandeep for two fours before smashing Holder for 18 runs, including a six over mid-wicket and a flat-batted whack straight down. By five overs, DC had racked up 50 runs.

Williamson and Warner went into a huddle and decided to bring Shahbaz Nadeem on. But the left-arm spinner’s first delivery was sent soaring over mid-wicket by Dhawan, before a bad full toss was pulled past short fine-leg.

The introduction of Rashid and T. Natarajan slowed things down, with the former even cleaning up Stoinis with a straighter one.

Dhawan, though, eased to his half-century with a slog-swept six off Nadeem.

Shreyas laboured for a 20-ball 21, but after playing out Rashid (4-0-26-1), DC seemed primed for a big score from 145 for two after 16 overs. Shetmyer didn’t disappoint, even hitting Holder for four fours in a single over. Natarajan bowled a superb 20th over (seven runs), but it was not to be.

Darren Sammy says he faced racism while playing in IPL

Sammy has urged the ICC to take serious note of racism which exists in the gentleman’s game. Source: thehindu.com Related

Legends Sunil Gavaskar and Sachin Tendulkar on Friday offered their condolences on former India all-rounder Bapu Nadkarni’s death. Nadkarni, 86, died on Friday following old-age related illness. He played 41 Test matches for India and was best known for his parsimonious left-arm spin bowling and ability to get maiden overs at will, including 21 consecutive […]

Test cricket is a great format, need to preserve it: Richards

Viv Richards is looking forward to the two-match Test series between India and the West Indies starting at Antigua on Thursday. He is also excited about getting to see Virat Kohli in action. Richards, who is a panelist on Extraaa Innings on Sony Pictures Sports Network for the series, shares his views with The Hindu […]