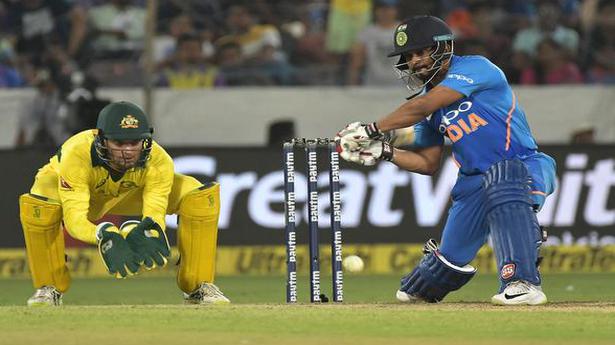 Towards the end, Kedar Jadhav was treating the crowd to his party pieces: a short ball from Pat Cummins was helped over the wicketkeeper’s head, a full delivery from Nathan Coulter-Nile was effortlessly chipped over long-on, and Adam Zampa was driven inside-out into the cover boundary.

Jadhav is a short man but he generates great power in his shots. After he chose to accelerate on Saturday, his last 51 runs came off 41 balls, with six fours and a six struck in that phase.

It was a fine display of Jadhav’s qualities as a finisher, as he and M.S. Dhoni hauled India to victory over Australia in the first ODI here with a pair of half-centuries.

“I’ve been batting at No. 6 for more than two years,” he said later. “Since the series against England in India (January 2017), the team management has been looking at me as a finisher. They have clearly told me, ‘You will be batting at No. 6 till the time you are there’.”

Dhoni’s elevation in the order has needed India to find a reliable No. 6, and Jadhav’s composure and his range of strokes appears to have solved that headache as the team approaches the World Cup.

Dhoni and Jadhav appear to bat well together: they saw India home in a similar low-scoring game in Melbourne earlier this year, and on Saturday they again paced the run-chase to perfection.

“Every time I see Mahi bhai, I feel very confident,” Jadhav said. “I can’t exactly put it in words. He has that sort of aura… you see him and feel ‘I will deliver today’. He has that knack of getting the best out of every player.”

Last year, he suffered a hamstring tear in the first game of the IPL and had to undergo surgery, missing the rest of the tournament and the England tour. He returned midway through the West Indies home series, before breaking down again in the final of the Asia Cup (where he sealed a last-ball win for India).

At 33, such wretched luck with injury can be disheartening, but Jadhav is happy the team has kept faith with him. He played the whole of the New Zealand series untroubled and India will hope he has no recurrence of the issues that have plagued him.

“In this team, everybody is encouraging towards me irrespective of how many times I have got injured,” the Maharashtra batsman said.

“Every time I have regained fitness, I have walked into the team. That was the confidence the management had in me and obviously, the kind of confidence they have given has helped me deliver consistently.

“Credit goes to the captain and management for backing me. Now is the time I pay them back for the confidence and faith they have shown in my difficult times.”

Jadhav’s bowling is another string to his bow, although he regards himself as nothing more than a part-timer. His presence gives India an extra spin option when, like in the first ODI, Virat Kohli wants to take one of his seamers off.

“I’ve never thought of bowling 10 overs in a game as of now,” Jadhav said. “If the situation demands it and the teams requires it, I can definitely do it. But doing so consistently will take mental and physical adjustment.

“I need to get fitter if I have to bowl 10 overs every game. I enjoy the chance to bowl, but I don’t think I’m a bowler. I do my job, I know my limitations.”

He seemed to have this habit of breaking partnerships, it was pointed out. “I guess I get lucky,” Jadhav smiled.

India will not be complaining.

Disappointing that IPL is not in India, says Rajasthan Royals captain Steve Smith

Royals skipper Smith feels adapting on the run will be the key Source: thehindu.com Related