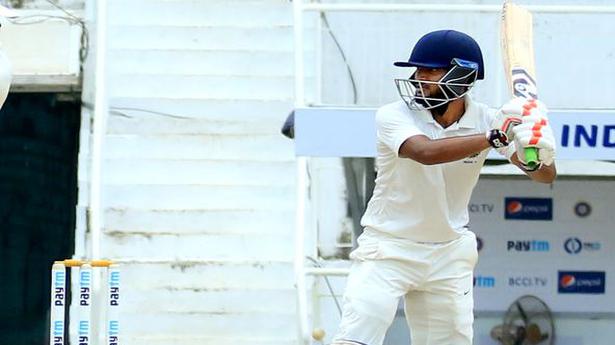 After a rearguard fightback by Jalaj Saxena and Shardul Thakur with the bat, the India-A bowlers put the hosts in command by reducing the visitors to 125 for five at stumps on the second day of the unofficial Test match at the Sports Hub here on Tuesday.

In the second innings, the South Africans were all at sea on a wicket which started helping the slow bowlers generously.

However, it was again the medium-pacers Mohammed Siraj and Shardul who shook South Africa early by dismissing the openers Pieter Malan (4) and Aiden Markram (4) cheaply.

But Zubayr Hamza (44) played with freedom and showed the technique to survive on the pitch until Ricky Bhui pulled off a brilliant reflex catch in the slips off Gowtham to end his stay.

It was left to Heinrich Klaasen (35 batting), who was dropped on 32, and Wiaan Mulder (12 batting) to survive an anxious final hour to push the match into the third day.

Ankeet Bawane fell early to Marco Jansen but both Shubman Gill (90) and K.S. Bharat (33) played fluently to add 44 for the fourth wicket.

But Dane Piedt produced the best ball of the India-A innings to clean up Shubman Gill when the batsmen looked set for a century.

The loopy off-break beat Gill in the flight and ball cannoned on to the stumps through the gap as the batsmen lunged forward.

Then fast bowlers Lungi Ngidi and Lutho Sipamla, in a sustained spell of aggression, broke the back of the Indian middle-order.

First, Ngidi had Shivam Dube (8) caught down the legside by ’keeper Klaasen. Then, Sipamla had the well settled Bharat edging a catch to Hamza in the slips and then yorked Gowtham for a duck.

Jalaj, who opened his account after 40 balls, changed gears when the tired South African bowlers offered him loose deliveries.

However Ngidi trapped Shardul in front and Piedt, with a double strike, hustled the end.

The contest is on a razor’s edge. One weighty partnership can give Tamil Nadu the lead. Or a brace of wickets may swing things in Karnataka’s favour. It’s crunch time at the serene NPR ground. Replying to Karnataka’s first innings score of 336, Tamil Nadu was 165 for four when bad light ended play on […]

I am different person in terms of how I think about the game, says Rohit Sharma

Rohit Sharma is in a “great space” in his life. India’s white-ball vice-captain enjoyed a phenomenal 2019 in which he scored a record 2,442 runs as an opener across three formats and more importantly took up the challenge of being a Test opener with stupendous success. “I am a different Rohit in terms of how […]