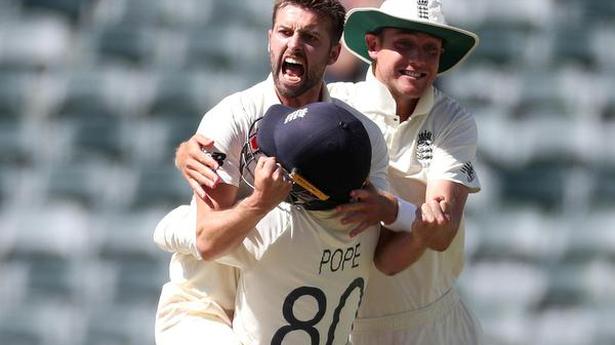 England bowled South Africa out for 274 runs on Monday to win the fourth Test at The Wanderers by 191 runs and ensure an emphatic 3-1 series victory.

Mark Wood took four wickets as the home team crumbled in the evening session after threatening to offer stoic resistance earlier in the day.

England completed the task with a day to spare with South Africa falling well short of their 466-run target in what would have been the highest fourth innings Test chase.

The success is a massive boost for a young English team who overcame several obstacles on a tough tour and questions over Joe Root’s captaincy.

“It took a lot to pick ourselves up after losing the first Test and that’s been extremely pleasing. It’s taken a big effort from every one and it’s a very exciting time for English cricket,” said Root as he took the series trophy.

For South Africa it marked a 108-year low as they lost for the eighth time in their last nine Tests for their worst run since 10 defeats in 11 Tests between 1910 and 1912.

Wood took 4-54 — finishing with nine wickets in the game — and Stuart Broad and Ben Stokes added two more for England as they took the last six South African wickets for 39 runs.

The home team were facing a near impossible target of 466 and provided a flicker of resistance but lost wickets at crucial intervals.

“England were better than us in every department with both ball and bat,” said home skipper Faf du Plessis.

“We have to give them credit for being the better team.”

Rassie van der Dussen scored 98, falling agonisingly short of a maiden Test century, before being tricked into offering an easy catch, just five balls after Du Plessis had been bowled by Stokes for 35.

Their 92-run partnership for the third wicket kept alive unlikely home hopes after South Africa were 90-2 at lunch.

Quinton de Kock hit another swashbuckling knock, but by the time he fell for 39 runs, with eight wickets down, the contest was already over.

Van der Dussen was given out leg before wicket to Chris Woakes with just the third ball he faced on Monday and almost ran out of time as he dithered over whether to review, but then won a reprieve as the ball was shown to be missing the wickets.

He took advantage to hit 15 fours and two sixes in a boundary-filled innings and will be livid with the way he went out, essentially ending hopes of fairytale for both himself and his team.

Cricketer-turned-politician Gautam Gambhir on Thursday said he has decided to contribute his two years’ salary as an MP to the Prime Minister-CARES fund to tackle the COVID-19 pandemic sweeping through the country. The BJP’s Lok Sabha member from East Delhi made the announcement on his Twitter page, urging people to come forward and donate generously. […]

Questions will be raised if T20 World Cup is postponed and IPL held in that window: Inzamam

The ICC is yet to decide the fate of the T20 World Cup in Australia which is scheduled to take place from October 18 to November 15. Source: thehindu.com Related

Cricket last thing on my mind at the moment: Shastri

“Stay indoors people. Crucial phase this. Only thing flying around the world like a tracer bullet is this bloody Corona (COVID-19). Stay in before the bugger gets you #IndiaFightsCorona.” A tweet typical of the man! Speaking to The Hindu from his home in Mumbai, India cricket coach Ravi Shastri said, “there is total gloom at […]