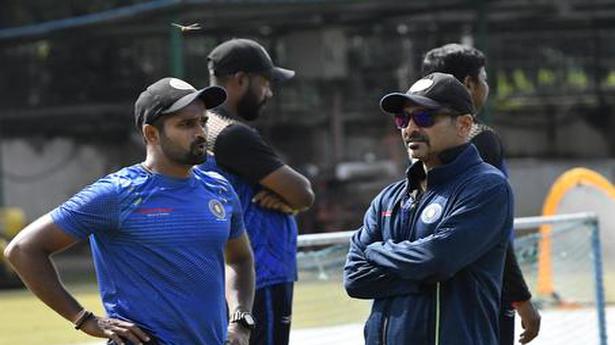 Having played for Karnataka for 15 years with distinction, it will be strange to see Vinay Kumar in opposition colours during the Vijay Hazare Trophy quarterfinal outing here on Saturday.

Vinay, who moved to Puducherry at the start of the season, will have to keep his emotions aside when he enters the M. Chinnaswamy Stadium. It cannot be easy, as Vinay will battle his old mates, at a venue he called home.

“Definitely there are emotions involved, but business is business. I’m looking at this as yet another game that we’re trying to win. It’s somewhat similar to playing in the IPL, where we go up against our State teammates,” the all-rounder said.

Vinay is enjoying his time with the Puducherry side. “I don’t feel that we are a small team, given the great support staff and facilities we have. I definitely miss Karnataka, but I don’t feel like there is a big difference between playing for the two sides. It was easy for me to adjust here, as I have played with many of these guys before. And of course, having JAK (current Puducherry coach and former Karnataka coach J. Arunkumar) around has helped a lot too,” he said.

David Warner, with 611 runs from 11 games, has been a leading light for Sunrisers Hyderabad in this edition of the IPL. And with the flamboyant opener set to play his final game this season for the Sunrisers before joining the Australian team as it prepares for the forthcoming World Cup, the home side will […]

Srinivasan has reinvented himself to stay relevant

In the kaleidoscope that cricket is, careers of various hues appear and disappear creating radiant patterns that only last momentarily. In this turbulent world, K. Srinivasan deserves credit for staying relevant by evolving and reinventing himself. A cricketer, a coach and an umpire, Srinivasan, younger brother of all-rounder K. Barathan, has seen it all. Prolific […]

The Warwickshire County Cricket Club (WCCC) on Friday announced that it is handing over the Edgbaston stadium to the government to create a drive-through COVID-19 testing station for the National Health Services (NHS) staff battling the pandemic. The stadium’s main on-site car park will be used to regularly test the medical staff who are working […]