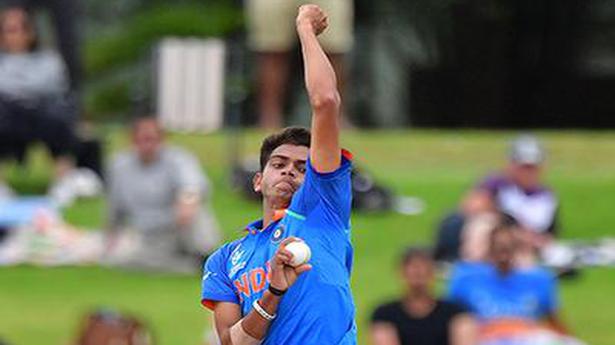 Young pacer Kamlesh Nagarkoti on Monday returned to the Indian team for the upcoming Emerging Asia Cup after a 19-month injury layoff.

The pacer, who excelled in India’s triumphant campaign at the U-19 World Cup in New Zealand last year, has been constantly monitored by experts at the National Cricket Academy (NCA) in Bengaluru, where he underwent rehab following a stress fractures in his lower back, heel and ankle.

The 19-year-old, who picked the first ever hat-trick for Rajasthan in List A cricket, last played a competitive game during the Vijay Hazare Trophy last year.

Nagarkoti, who formed a fine combination with fellow pacer Shivam Mavi during the World Cup, is one of the notable names in the squad announced after a meeting of the junior selection committee in Mumbai.

The tournament is scheduled to be held in Bangladesh in November.

Saurabh Tiwary does it for Jharkhand

Saurabh Tiwary, with an unbeaten half-century (61 n.o., 47b, 7×4, 1×6 ), led Jharkhand to a six-wicket win over Hyderabad in the Vijay Hazare Trophy here on Saturday. In a rain-curtailed 34-overs-a-side affair at the Just Cricket Ground, Hyderabad, after opting to bat, scored 192 only to see Jharkhand chase it down with two balls […]

Rohit Sharma on Sunday took a dig at the International Cricket Council (ICC) after his name did not feature in a poll initiated by the apex body on who has got the best pull shot in international cricket. The ICC tweeted a collage of Viv Richards, Ricky Ponting, Herschelle Gibbs and Virat Kohli asking “which […]

Tribute to the Mahatma!

It’s fitting that the India-South Africa Freedom series is beginning here on October 2, the 150th birth anniversary of Mahatma Gandhi. There is a common bond that runs through Gandhi, India and South Africa. Indeed, South Africa is an important stop in the inspirational man’s tale. Gandhi spent as many as 21 years of his […]