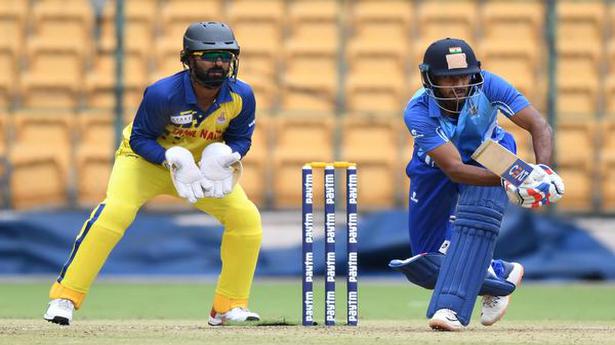 “We were always glad to play in Bengaluru because the crowd is always behind us, right from the first ball. They’re always here to back us.

“It may be small numbers, but anything beyond the 11 guys playing inside — any voice from outside — will definitely help. It’s definitely an advantage,” Manish said.

Manish praised young opener Devdutt Padikkal, who made 609 runs to finish as Karnataka’s highest run-scorer of the tournament.

“Devdutt is a great asset at the top of the order. The loss against Hyderabad hit him hard, because if he had batted through, we would have won the game.

“That match made him change his mindset to bat till the end and get the hundreds,” Manish said.

The 30-year-old has been in great form himself, scoring at average of 105. “At two-drop, I had to take extra responsibility and be there till the end.

“I’m a little sad that I didn’t get to bat in the last couple of matches. I was very eager to bat, but I’m happy to sit here with the trophy,” Manish said.

Tamil Nadu captain Dinesh Karthik stated that it had been an “incredible journey”, considering that the team could not reach the knockout stage of the tournament in the previous two editions.

“It’s been an incredible journey. At the start of the tournament, if you had said we would reach the final, I would have been very proud,” Karthik said.

On Mayank Agarwal’s attacking unbeaten 69, Karthik said, “When an India cricketer who has done well against a top side like South Africa comes and plays at this level, he will make things look far easier than it really is.”

India head into their all-format tour of the West Indies this weekend with more on their mind than simply winning a couple of T20s. For Virat Kohli’s side — and indeed for the West Indies — it is a chance to pick up the pieces after a disappointing one-day international (ODI) World Cup in England […]

Sophie Devine led from the front, smashing an unbeaten 75 for her sixth straight T20 half-century, to guide New Zealand to a seven-wicket victory over another Sri Lanka in a Group A match of the ICC Women’s World Twenty20 World Cup on Saturday. In Group B, West Indies captain Stafanie Taylor, with an allround display, […]