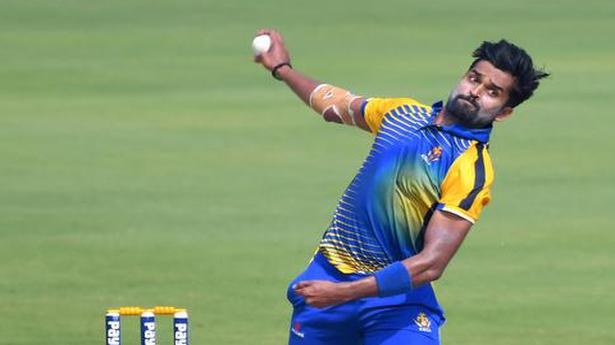 Karnataka knocked over Mumbai for its worst Twenty20 score in a Group B Super League match of the Syed Mushtaq Ali Trophy here on Friday.

Karnataka’s fast bowlers proved to be too strong for Mumbai’s batsmen. Except for V. Koushik, the success story in the preliminary phase, the other three found victims in their opening bursts.

Mumbai’s other opener Siddhesh Lad faced a torrid over from the tall Prasidh Krishna. Krishna challenged the Mumbai top and middle-order bowling fast and straight outside the off-stump and got rid of Lad.

Manoj Bhandage — another debutant for Karnataka in the preliminaries — broke Mumbai’s back forcing a false shot from Shreyas Iyer and winning a leg before decision against Aditya Tare.

By the end of the eighth over Mumbai was in dire straits at 39 for five.

Making brilliant stops at point on the 30-yard circle, Jagadeesha Suchith impressed. And the left-arm spinner made his first over count, removing Suryakumar Yadav.

It was a near-perfect bowling and fielding effort by Karnataka; the superb effort by Vinay Kumar running sideways at extra cover to send back Dhawal Kulkarni off Koushik, depicting Karnataka’s outstanding team performance.

Umesh Yadav got into the thick of action dismissing Unmukt Chand off the second ball of the match and thereafter his new-ball partner Shrikant Wagh caused major damage removing Dhruv Shorey and captain Nitish Rana.

Delhi did not recover from these blows and folded up for 82. Hiten Dalal dealt with the grim situation in a calm and assured manner to make a polished 42 with two 4s and three 6s.

Spinner Akshay Karnewar put on display his ambidextrous talent. He bowled left-arm spin to the right-handers and right-arm off-breaks to the left-handers and scalped Pawan Negi and Pranshu Vijayran.

Vidarbha openers Jitesh Sharma and Atharva Taide flayed the Delhi bowling in the PowerPlay overs and ensured a clear-cut win for their side.

The captains of both teams — Ishant Sharma and Faiz Fazal — did not take the field.

Richa Ghosh is still soaking it all in. When most girls of her age will be preparing for their board exams in February, the 16-year-old Siliguri girl will be preparing for her maiden international cricket tour with the Indian women’s side and that too the ICC World T20. The teenager picked up the willow seeing […]

Sunrisers Hyderabad can again be a force to reckon with

For a team which reached the final of the last edition without its flamboyant opener and winning-captain David Warner, former champion Sunrisers Hyderabad (SRH) should pose a bigger challenge to its opponents in the 12th edition what with Australian returning to the team after serving a ban for a ball-tampering controversy. A major features of […]