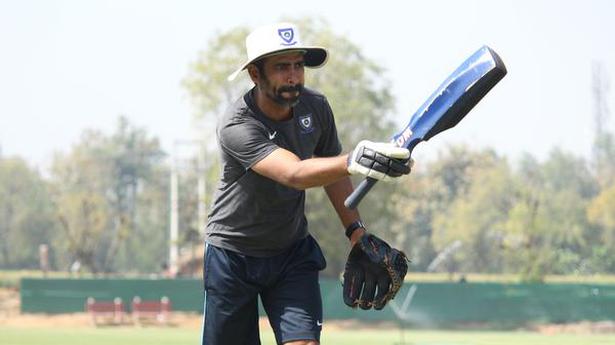 There was blood on the pitch when Ajay Ratra took guard in the first innings of the Antigua Test in 2002. Anil Kumble’s jaw had been broken by a Mervyn Dillon bouncer. India’s greatest match-winner would come out to bowl, his face bandaged. Viv Richards called it one of the bravest acts he had ever seen.

That Test is unforgettable for Ratra for another, more personal, reason, too. He scored a hundred, which made him the youngest wicketkeeper to achieve the feat. His unbeaten 115 helped India recover from a mid-innings collapse and post a mammoth total. He was named the Man of the Match in only his third Test.

At 20, it looked as if India’s ’keeping gloves would be in his possession for a while. But he played only three more Tests. After his last First Class game in 2013, he turned to coaching; he is one of India’s few specialist wicketkeeping coaches now.

In an interview with The Hindu in Jaipur, where he trained some of India’s most promising ’keepers at an under-19 BCCI camp, Ratra said the craft didn’t always get the attention it deserves. Excerpts:

What made you take up coaching at a young age?

I had started it even three years before I stopped playing. I wanted to share my knowledge. And I had done a Level-1 coaching course.

Do you think there should be an increased focus on coaching ’keepers?

Absolutely. Shortly after I started out as a coach, I found that there were very few coaches who specialised in ’keeping. You won’t find any at the local level.

Specialist coaches can produce impressive results, as Bruce French has shown with the England side…

Yes, a ’keeper can gain a lot from working under a good coach, who has played at the highest level. I can vouch for that myself, having trained under great ’keepers like Rodney Marsh, Syed Kirmani and Kiran More.

I worked with Marsh and Kirmani at the National Cricket Academy (NCA) in Bengaluru. They had different styles, and you had to pick the points that you needed.

From Marsh, I learnt how to keep up to the pacers and from Kirmani about standing up to the spinners. I was part of the first batch at the NCA, where my mates were Zaheer Khan, Yuvraj Singh, Harbhajan Singh, Murali Kartik and Reetinder Sodhi.

Then I had a senior Indian camp with More just before a Challengers Trophy. I was a different keeper after that.

How do you find working with ’keepers in camps like the one you had here?

I am very happy that I have got this opportunity. And it is a good step the BCCI has taken to give specialised coaching in ’keeping.

Last year I had worked with the under-16 batch at the NCA. And just a few weeks ago, I had organised a coaching camp exclusively for ’keepers at Faridabad, my hometown. I would like to do more camps like that in other parts of the country too, if I could get some sponsors.

I have also had sessions recently with Wriddhiman Saha after his injury. I believe Saha is the best choice for India in Tests still.

What do you think about the man who replaced him, Rishabh Pant?

He has done well in Tests. In England, he was struggling a bit, but it is not an easy place to tour for a ’keeper. He did well in Australia. He is improving, but he could get better if he works on a few areas. He tends to go towards his left; that is his initial moment, from habit. And he has to improve his balance. Against spinners, he has to work on the bounce of the ball.

Which other young Indian ’keepers impress you?

Ishan Kishan is good in terms of ’keeping and consistency with the bat. Prabhsimran Singh, with whom I worked at the NCA, is a decent ’keeper and good batsman. The India Under-19 ’keeper Anuj Rawat is also promising.

Who do you think is the best ’keeper in the world at the moment?

M.S. Dhoni, without a doubt. He has his own technique. He has a sixth sense. Whenever he leaves the ball, it hits the stumps. His reverse flick, without looking, is amazing.

Dhoni is a contemporary of yours. Did you think he would become this good?

Honestly, no. But the best part about him is that he improved consistently. Maybe the success with the bat made him more confident as a ’keeper. He is very intelligent. His mind is sharp. If you look at the DRS too, you will find that he gets it right often. If Dhoni is doubtful, the results show.

Looking back at your own career, the high point must have been that hundred in Antigua.

Yes. Scoring a hundred in the West Indies was a dream for me. They were playing four pace bowlers, and it was a new experience for me. I was used to playing only two pacers in India and they weren’t so quick.

It was a horrible feeling watching blood on the pitch — you see one guy get hit on the jaw and you are next in. I had never faced bowling like that. I remember Chris Gayle saying, “Kill that boy.”

Initially, it was about survival mostly and giving support to V.V.S. Laxman, who kept on encouraging me. I took many balls to settle down, but once I got set, and Laxman got dismissed (after a partnership of 217), I started scoring faster.

But your international career would end later that year.

I have no regrets now; I gave everything I could. I was privileged to be part of a team that had all those legends like Sachin Tendulkar and Rahul Dravid.

Dravid’s contribution as a coach to Indian cricket is also tremendous, isn’t it?

Indeed. What Dravid does with India’s Under-19 and A teams is something you never have seen before. If India goes to South Africa, an A team will go there first, and when somebody does well, he gets a chance in the senior team. If a player is not in the India ODI squad, he will be taken on the A tour. There never was such scheduling in Indian cricket. He also introduced the rule that one could play only one U-19 World Cup. So more youngsters get opportunities.

The BCCI should also be given credit for the NCA and the improved facilities you find across the country. Another thing that has helped India’s young player develop is the IPL. Once you graduate from domestic to international cricket, there is always a doubt whether you belong to this arena or not. Those doubts are cleared at the IPL. When you hit a six off Dale Steyn, you are mentally prepared for the highest level.

The aura of invincibility India built in recent years, especially at home, in the limited-over format has vanished. In what was the team’s last ODI before the World Cup, the collective performance of a puzzling combination left more questions unanswered than it started out to address. In addition to the persisting middle-order woes and lack […]

Bumrah will be indebted to Virat just like I am grateful to Ramesh: Harbhajan

Harbhajan Singh believes Jasprit Bumrah will forever remain indebted to Virat Kohli’s “gut feeling”, which got him the hat-trick, just like he is grateful to Sadagoppan Ramesh for an incredible catch at forward short-leg 18 summers ago. Harbhajan, India’s first-ever hat-trick man in Test cricket, lauded Bumrah, who became only the third (Irfan Pathan was […]

Commentators working on the Ranji Trophy match between Karnataka and Baroda were forced to apologise here on Thursday after making seemingly insensitive remarks on air. Broadcasters Rajinder Amarnath and Sushil Doshi, calling the game for Hotstar, made the controversial comments during the second day’s play at the M. Chinnaswamy Stadium. Sunil Gavaskar’s work as a […]