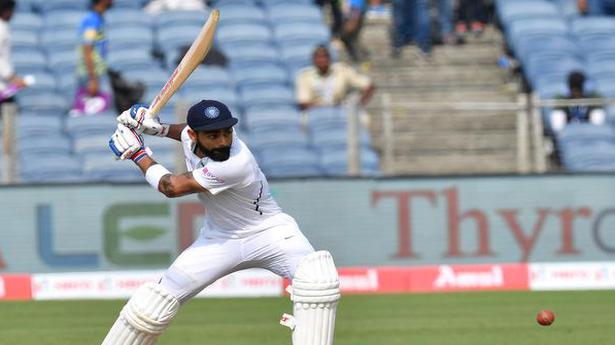 Virat Kohli is synonymous with converting fifties into big hundreds. And the India captain couldn’t have asked for a better situation than his 50th Test as captain to gallop to his personal best to virtually seal the fate of the second Test — and the Freedom Series — on the second day of the game.

Thanks to Kohli’s unbeaten 254 and contrasting yet vital support by his deputy Ajinkya Rahane and allrounder Ravindra Jadeja, India declared its first essay at a gargantuan 601 for five at the Maharashtra Cricket Association Stadium here.

Umesh Yadav then got rid of both the tired openers to leave South Africa reeling at 13 for for two.

India may have added 328 runs to its overnight total of 273 for three in just over 71 overs before calling curtains on the innings but the Proteas’ pace duo of Vernon Philander and Kagiso Rabada bowled nagging lines early on in the morning.

Kohli and Rahane were fortunate to have not nicked in the cordon, with Kohli’s soft hands ensuring none of his edges carried to fielders.

After the first hour, while Rahane continued to concentrate on retaining his wicket, Kohli started rotating the strike, literally at will. Once Keshav Maharaj’s left-arm spin was introduced, Rahane — having survived a close lbw shout off the first ball — started scoring a little freely and he and Kohli were involved in a mini-race for getting to their fifty and hundred, respectively.

While Rahane raised his fifty first with a dab to Anrich Nortje at midwicket for a single, Kohli fittingly crossed his 26th Test hundred with a straight-driven four, his 16th, off Philander.

The closest the duo came to separation was in the last over before lunch when Rahane survived an attempted single, with Temba Bavuma’s rocket throw missing the stumps by a whisker.

Minutes after lunch, Kohli switched gears with two glorious straight drives in an over off Rabada and followed it up with two supreme cover drives later in the spell to ascertain his authority in the mini-battle.

Rahane, however, couldn’t deal with a typical left-arm spinner’s delivery that spun slightly away from him to give Maharaj a reason to rejoice.

With the 178-run partnership coming to an end, Jadeja adopted a cautious approach while Kohli continued to drive and flick through the gaps. One of the features of Kohli’s batting in the recent years has been his ability to score freely despite not getting aerial and it came to the fore in plenty as he plundered 90 runs in the session.

When the duo returned to the crease, Kohli was six runs shy of his record seventh double hundred, and he got there in the third over of the session with a flick to fine-leg for a couple off Senuran Muthusamy. Then Kohli pulled the spinner into the stands.

The next ball, Faf du Plessis — who had earlier failed to get a finger to at least two half-chances offered by Kohli off Maharaj — took a sharp catch in the slips but the replays showed Muthusamy had overstepped.

The next ten overs saw Jadeja and Kohli toying with the spinners as South Africa haplessly waited for the declaration. By the time Jadeja scooped one to long-off, the duo had added 97 runs in 10 overs and helped India cross the 600-run mark.

The onslaught gave the bowlers more than an hour to have a go at the tired batsmen and the pacers delivered without any fuss.

They got rid of three top-order batsman, forcing the Proteas to employ Nortje as a nightwatchman who saw off the last 20-odd minutes without further damage.

With Delhi Capitals repeatedly shooting itself in the foot, Sunrisers Hyderabad’s successful chase was never in doubt. The eventual five-wicket verdict was Hyderabad’s third win and resulted in the third defeat for the host. Much before the winning six was hit, Delhi’s ordinary batting and Hyderabad’s whirlwind start gave the match a one-sided look. In […]

Bangladesh will host Zimbabwe for a tri-nations Twenty20 tournament in September despite the African nation being suspended by the game’s world body, an official of the Bangladesh Cricket Board said Thursday. The International Cricket Council (ICC) suspended Zimbabwe in July over a failure to keep the sport free from government interference, putting the country’s participation […]

The Indian women’s team will look for an improved show in the fielding department to complement its fine bowling when it takes on Australia in its second game of the Tri-series here on Sunday. India beat England by five wickets in the tournament opener on Friday. India put up a fine bowling performance, led by […]