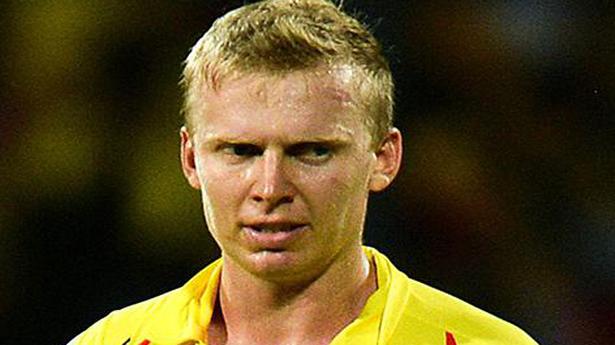 Debutant Scott Kuggeleijn played a key role for Chennai Super Kings in its win over Kings XI Punjab, giving away just ten runs and taking two wickets in his final two overs, especially after going for 27 in his first two.

However, the 27-year-old, who has played two ODIs and four T20Is for New Zealand, has been in the news for the wrong reasons in his home country. He was accused of sexual assault and faced charges of rape in 2015.

He was found not guilty in a retrial in 2017 after a trial in 2016 had returned a hung jury verdict. He was booed during the T20Is against India in New Zealand earlier this year. Many held up placards and banners, protesting his selection.

The all-rounder was roped in by CSK as a replacement for the injured South African pacer Lungi Ngidi. After signing him, coach Stephen Fleming had said, “We have looked for an all-rounder who has good pace and variations. We don’t have a tall fast bowler who gets bounce like Ngidi. Kuggeleijn has got pace, which is something different.”

Top executives of all the full members of the International Cricket Council (ICC) will discuss possible resumption of international cricket and rescheduling two new ICC tournaments — the World Test Championship and the ODI Super League — during a conference call of the Chief Executives’ Committee (CEC) on Thursday. The CEC has been convened with […]

Bangladesh, India arrive in Indore ahead of first test

The India and Bangladesh cricket teams arrived in Indore in Madhya Pradesh on Monday for the first Test scheduled to start on November 14. The two squads reached Devi Ahilyabai Holkar Airport by a special plane from Nagpur, where they played the third and final T20 International on Sunday, and then headed for their respective […]

The Netherlands became the third team, after Papua New Guinea and Ireland, to book a place at next year’s T20 World Cup after thrashing the United Arab Emirates in Dubai on Tuesday. UAE, which started the tournament with victory over Ireland, could only muster 80 for nine in its 20 overs which the Dutch managed […]