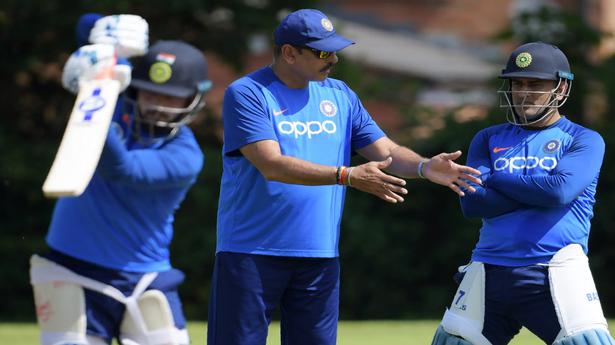 England captain Eoin Morgan won the toss and decided to bat first against India at Edgbaston.

England made a couple of changes, bringing in opener Jason Roy (back from injury) and Liam Plunkett. India made one change, bringing in Rishabh Pant for the all-rounder Vijay Shankar who is down with a toe injury.

England are under pressure to win both their remaining games to qualify for the semifinals. India, for the first time wore their new orange-blue away kit.

With an unbeaten record in six encounters so far, Virat Kohli’s men are all but through to the semifinals with 11 points but a win against England will further tighten their grip at the top and in the process oust the hosts from the global event.

Not long ago, England were considered to be favourites to win the tournament but Eoin Morgan’s men have bungled big time in crucial games, which has now brought them at the verge of exit with only eight points from seven games.

Putting his weight firmly behind under-pressure Vijay Shankar, skipper Virat Kohli Saturday said the all-rounder is very close to playing a defining knock for India in the World Cup.

Kohli’s vote of confidence ahead of the England game means that Rishabh Pant will have to wait to get his first game.

Asked about his assessment of Shankar, Kohli said, “It’s a strange one because he had a decent game against Pakistan. I think against Afghanistan on that pitch he looked really assured. Shot selection, again, we discussed with him for that game. Last game, again, he came out, he looked really good, and he got a beautiful ball from Kemar Roach.”

India skipper Virat Kohli on Saturday unveiled the orange-and-dark-blue jersey that the team will wear in their World Cup match against England in Birmingham.

Blue has been Indian cricket’s dominant colour since the advent of coloured clothing but Kohli, known for his fashion sense, was impressed by the new kit for Sunday’s match at Edgbaston.

England all-rounder Moeen Ali has set his sights on taking the prized wicket of India captain Virat Kohli during their big-ticket World Cup clash in Birmingham on Sunday.

Kohli hit two half centuries to bail out India twice in the last two matches after losing early wickets against Afghanistan and West Indies.

“Virat knows he’s there to score runs for India, while I’m here to get him out (or score some myself). It means a lot to get a player like him out but you can still be friends trying to do it,” Ali, who has played under Kohli at Royal Challengers Bangalore, wrote for ‘The Guardian’

Chennai Super Kings won the toss and opted to bowl against Royal Challengers Bangalore in their IPL match here Sunday. For CSK, regular skipper Mahendra Singh Dhoni and Dwayne Bravo come back into the team in place of Karn Sharma and Sam Billings. RCB have made two changes, bringing in AB de Villiers in place […]

Australia heavily hinted on December 3 that it will field the same XI for the opening Test against New Zealand to the one that thrashed Pakistan, with selectors keen to build a core group of players. Tim Paine’s men have proven to be far more consistent in recent months, having retained the Ashes in England […]

Karnataka, Delhi and Maharashtra post wins in women’s T20 tournament for the blind

Delhi registered a nine-wicket victory over West Bengal in the opening match of the Samarthanam women’s National T20 tournament for the blind on Monday. Karnataka, too, opened its campaign in style, recording a seven-wicket win over Jharkhand. In the other match of the day, Maharashtra defeated Kerala by eight wickets. The scores: West Bengal 32 […]