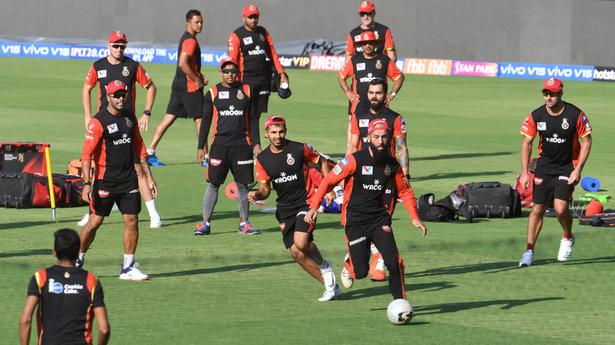 Royal Challengers Bangalore skipper Virat Kohli won the toss and opted to field against Kings XI Punjab in an IPL match in Mohali on Saturday.

RCB made one change, bringing in Umesh Yadav for Tim Southee, while Kings XI included Andrew Tye, in place of Hardus Viljeon, who is down with flu.

Mayank Agarwal, who missed the last match due to a finger injury, also came back and M Ashwin replaced Ankit Rajpoot, who is also nursing an injury.

A two-minute silence was observed by team members of IPL teams Kings XI Punjab and Royal Challengers Bangalore on Saturday in remembrance of martyrs of the Jallianwala Bagh massacre, to mark the centenary of the tragic event.

Royal Challengers Bangalore will look to snap its six-match losing streak in IPL-12, at the PCA Stadium where Kings XI Punjab won all three matches so far.

Three weeks ago when the tournament commenced, none would have visualised this scenario — R. Ashwin’s men entering the second half of the campaign with four wins and an exasperated Virat Kohli’s brigade searching for first victory.

Usually, teams aim for an eighth win to ensure a place in the playoffs. Obviously, Punjab is far closer to the target than Bangalore is. Notwithstanding the fact that Kings XI faces a struggling RCB twice in its next seven matches, the side is optimistic of winning at least four more times and reach the playoffs.

Ganguly likely to be BCCI president

Nominations for six slots for the BCCI Apex Council and two for the IPL Governing Council will close at 3 p.m. on Monday, but until late on Sunday, a consensus eluded on the choice of President. The names of Brijesh Patel and Sourav Ganguly were considered by vertically split groups. Things were not clear about […]

India captain Virat Kohli met the new BCCI president Sourav Ganguly at the Cricket Centre here on Thursday. Kohli had already congratulated Sourav and expressed his delight at the former cricketer being elected for the prestigious BCCI position. Having completed the third Test against South Africa well before time, Kohli got the opportunity to meet […]