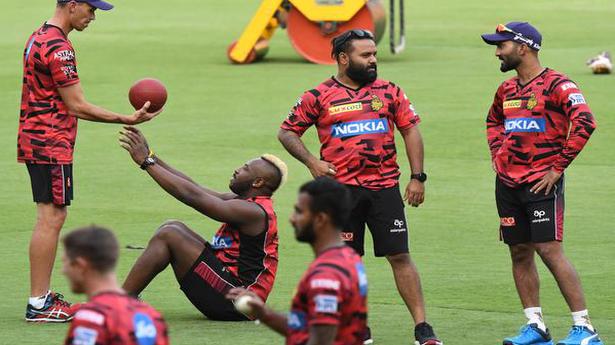 Delhi Capitals captain Shreyas Iyer won the toss and opted to bowl in their IPL match against Kolkata Knight Riders in Kolkata on Friday.

KKR made three changes from the playing eleven of their last match with Lockie Ferguson, Joe Denly and Carlos Brathwaite coming in place of Sunil Narine, Harry Gurney and Chris Lynn.

Andre Russell’s extra-terrestrial effort with the bat may have propelled Kolkata Knight Riders to three out of its four wins in the Indian Premier League so far, but the two-time champion side will be keen to use its untapped resources in its forthcoming matches.

The burly West Indian has grown in stature because of his explosive batting. Russell has emerged as the highest run-getter for his team and has hit the maximum sixes (25), most runs in an over (27) and is the only one to have a 200-plus strike rate (212.39).

The 30-year-old’s fiery performances have dwarfed the efforts of other KKR batsmen such as Nitish Rana, Chris Lynn, Robin Uthappa and Karthik. The team is yet to derive the best out of Shubman Gill, though.

New Zealand all-rounder Jimmy Neesham on Tuesday mocked the ICC after the world body decided to scrap the controversial boundary count rule that saw his team lose the 50-over World Cup to England. The ICC on Monday tweaked the Super Over rule for all its major events following the uproar over the outcome of the […]

IPL 2019 | RR vs RCB: Rajasthan Royals get into the points mix, finally

Shreyas Gopal got it right with a stunning series of wrong ’uns. The Rajasthan Royals leg-spinner came up with a dream spell that helped his team post its first win after three straight defeats. For Royal Challengers Bangalore, which lost by seven wickets at the Sawai Mansingh Stadium here, the nightmare continues. Virat Kohli’s men […]