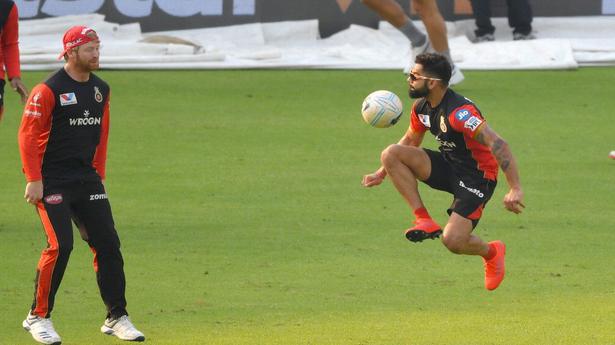 Kolkata Knight Riders won the toss and opted to bowl against Royal Challengers Bangalore in Kolkata on Friday.

Henrich Klaasen replaced an unwell AB de VIlliers while Dale Steyn made his return to RCB after nine years.

The Knight Riders are playing an unchanged side.

Kolkata Knight Riders will be eager to figure out its Plan B for acceleration in the death overs as it steps into the second phase of the Indian Premier League with an engagement with the Royal Challengers Bangalore at the Eden Gardens here on Friday.

The lack of desired acceleration, coinciding with the exit of Andre Russell, has affected KKR in the last two home matches.

After the West Indian’s departure at the total of 161 in 18.2 overs against Delhi Capitals, KKR could add only 17 runs off 10 deliveries. Against Chennai Super Kings, KKR managed only 29 off 31 following Russell’s dismissal at 132 in 14.5 overs.

For a side, which is yet to make an impact with its bowling unit, those 15-20 extra runs can make a big difference.

Russell has done this in the past and KKR will hope that the massive West Indian, who had an injury issue in the nets on Wednesday, regains his fitness.

BCCI electoral officer N. Gopalaswami confirmed on Thursday that the cricket associations of Tamil Nadu, Haryana and Maharashtra have been disqualified from attending the BCCI AGM/election in Mumbai on Oct. 23. Uttar Pradesh, Manipur and the three Government members — Services, Indian Railways and All India Universities — also do not figure in the final […]

The team was scheduled to play four ODIs and two T20Is from June 25 Source: thehindu.com Related