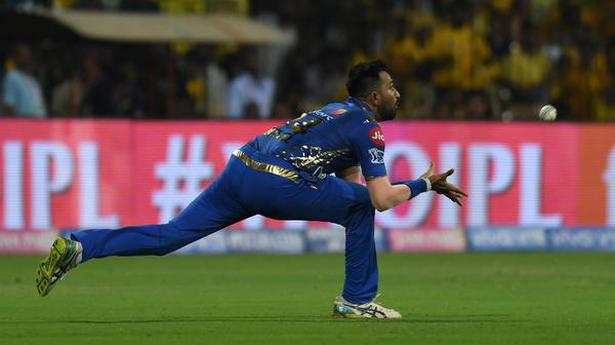 Mumbai Indians won the toss and put Kolkata Knight Riders in to bat in an Indian Premier League match in Kolkata on Sunday.

Kolkata Knight Riders, needing to win its remaining three matches to have a shot at qualification, will meet Mumbai Indians twice in the next eight days. The first meeting will be at the Eden Gardens on Sunday, the Kolkata side seeking to stay alive and also end its home assignments on a high.

It will be anything but easy for Knight Riders who are on a six-match losing streak, their last win coming almost three weeks ago. Even though the team has not under-performed with the bat, except for the collapse in Chennai, its batting has attracted more criticism than its bowling.

The Knight Riders bowlers have not been able to take enough wickets and put pressure on their opponents.

Whenever the bowlers have managed to take early wickets — like against Royal Challengers Bangalore and Rajasthan Royals — they have ended giving away too many in the latter half of the innings.

Tough times have triggered self-doubts in Knight Riders and is slipping into a deeper hole with its experimentation.

After two successive defeats, Mumbai needed its batsmen to step up. Shams Mulani (87) and skipper Aditya Tare (69 batting) did just that, their fighting knocks rescuing the team from a precarious 129 for five against Tamil Nadu on day one of their Group B Ranji Trophy match at the M.A. Chidambaram stadium here on […]

India’s first ever Day/Night Test will be a success only if the dew factor is countered effectively at the Eden Gardens, says the iconic Sachin Tendulkar, apprehensive that wet conditions might severely hamper pacers and spinners alike. Tendulkar welcomed the introduction of Tests under floodlights in India, saying it is a “good move” and will […]

Patil warns against a knee-jerk reaction

It has been a nightmare season for Mumbai in the Ranji Trophy. It lost to Railways and Karnataka and has six points from three games. Former India batsman Sandeep Patil, tells The Hindu that it’s time for the players to take responsibility. Excerpts… What is wrong with Mumbai this season? I am not involved with […]