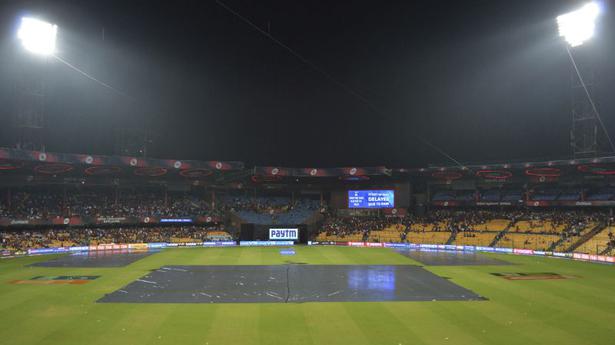 Steve Smith of Rajasthan Royals won the toss in Bangalore and decided to bowl first, before rain struck.

RR is in a better position, but only just. Consecutive wins in the last two matches have injected some life late in the campaign.

The visitors, however, will miss the services of all-rounders Ben Stokes and Jofra Archer.

The two key players recently left the squad to join the England team. Archer, in particular, had provided tremendous value with both bat and ball.

In the Kolkata Knight Riders game, Archer smashed an unbeaten 12-ball 27 to help RR seal a three-wicket victory, while his express pace and tight length has troubled opposition batsmen right through the season.

The rains seem to follow the Indian team. Just as the squad settled into Southampton, the venue for its Saturday’s World Cup clash against Afghanistan, the weather remained cold and damp for large parts of Tuesday. The Men in Blue arrived in batches since Monday and openers Rohit Sharma and Shikhar Dhawan with their respective […]

Mumbai and Hyderabad to swap T20Is

As a fallout of the Mumbai Police’s refusal to provide security on December 6, the itinerary for India’s T20I series against the West Indies next month has been tweaked. The first and third matches of the series, earlier scheduled in Mumbai on December 6 and Hyderabad on December 11, have been swapped. Hyderabad Cricket Association […]

No conflict of interest in Dravid case: CoA

The Supreme Court appointed Committee of Administrators (CoA) reiterated its view on Tuesday that former India captain Rahul Dravid has no “conflict of interest” (COI) issues in connection with his appointment as Head of the National Cricket Academy in Bengaluru. The BCCI’s Ethics Officer Justice (retd.) D.K. Jain, following a complaint from Sanjeev Gupta, a […]