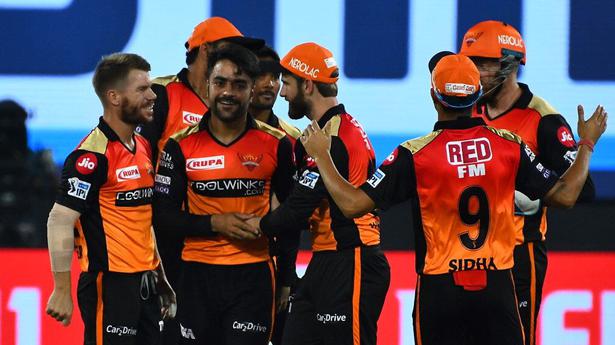 Rajasthan Royals captain Ajinya Rahane won the toss and elected to bat first against Sunrisers Hyderabad in an Indian Premier League match in Hyderabad on Friday.

Rajasthan have fielded an unchanged team, while Sunrisers have made two changes.

Kane Williamson has returned to lead Sunrisers in place of Shakib Al Hasan, while Deepak Hooda made way for Shahbaz Nadeem.

It will be a battle between two teams which would be eager to regroup from the early losses they suffered in the Vivo IPL-12 when former champion Sunrisers Hyderabad takes on Rajasthan Royals at the Rajiv Gandhi International Stadium here on Friday.

With Sunrisers wilting under the onslaught of West Indian Andre Russell in the death overs against Kolkata Knight Riders, probing questions did crop up about the bowling attack during crucial stages.

Apparently, the major concern is the diminishing striking prowess of its star bowler and knuckle-ball specialist Bhuvneshwar Kumar, who has been struggling a bit in the last year or so.

It will be interesting to see who will partner David Warner, who showed his destructive ability in the first match on his comeback against KKR the other night as Kane Williamson, who is said to be fit for Friday’s game, is also expected to lead the side.

Sunrisers Hyderabad head coach Tom Moody said that were hopeful of captain Kane Williamson being available (who missed the first game due to injury) for selection against Rajasthan Royals.

“It is always a joy to play in front of home crowds with the Orange Army supporting us in a big way. There has been dramatic increase in the fan base and this lifts the energy levels of the players,” Moody said.

IPL 2019: Bravo injury going to cause a little bit of re-jigging of the team, says Hussey

After a good start with three wins in as many matches, Chennai Super Kings suddenly seems to have problems piling on in its title defence campaign following its big defeat to Mumbai Indians few days back. Just as it readied a replacement for the injured Lungi Ngidi in Scott Kuggeleijn, the team has now suffered another […]

Will Ganguly and Brijesh get the nod?

The Lodha Panel recommended a compact governance structure in the form of a nine-member Apex Council consisting of six full members of the BCCI, a male and female cricketer elected by the player association and one representative of the CAG office. The panel felt that the Working Committee virtually ran the show like a fiefdom […]