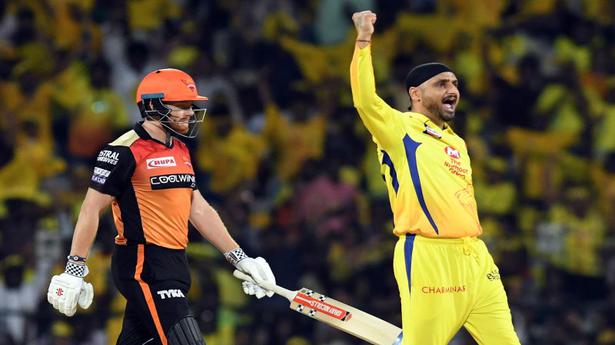 Shane Watson brought back memories of last year’s IPL final with a blazing knock that has now almost ensured a play-off berth for Chennai Super Kings as they beat Sunrisers Hyderabad by six wickets here Tuesday.

On a vastly improved Chepauk track, Watson roared back to form with an 96 off 53 balls as CSK stuttered a bit in end before winning in 19.5 overs.

Watson’s innings studded with nine fours and half a dozen of sixes ensured that CSK have reached the cut-off limit of 16 points needed for the play-off even though they would like to finish in the top two.

Watson’s innings would also be a relief for skipper Mahendra Singh Dhoni, who had urged the top order to finish matches.

A 77-run stand between Watson and Suresh Raina (38) created the platform and the former Australia all-rounder singlehandedly decimated the Sunrisers attack.

What made it more difficult for the Sunrisers was the fact that their strike bowler Rashid Khan was pulverised by Watson, who took him to the cleaners with 44 coming off his spell.

Just when the first objective was in sight, after seven wins from its first eight games, defending champion Chennai Super Kings’ march to the playoffs in Vivo IPL-12 has been halted.

The twin defeats on the road, first to Sunrisers Hyderabad and then Sunday’s agonising one-run loss to Royal Challengers Bangalore, meant the table-toppers are still waiting to seal their place in the final four, which an eighth win should certainly do.

While a 2-2 result after four away matches is not bad, considering the team has been unbeatable on home soil, the last few matches have highlighted a problem the team has been facing since the start of the season — lack of runs at the top. And CSK needs to set that right before it derails the team’s progress further.

On Tuesday, CSK starts a run of three home matches, beginning against SRH and would hope to keep its unbeaten run at home going.

Kedar Jadhav’s responsible 86 and Shahbaz Nadeem’s crucial four-wicket haul were significant contributions in the well-rounded performance of India-B, which beat India-C by 51 runs to win the Deodhar Trophy at the JSCA Stadium here on Monday. Opting to bat in the final, India-B overcame a slow start to post 283 for seven and then […]