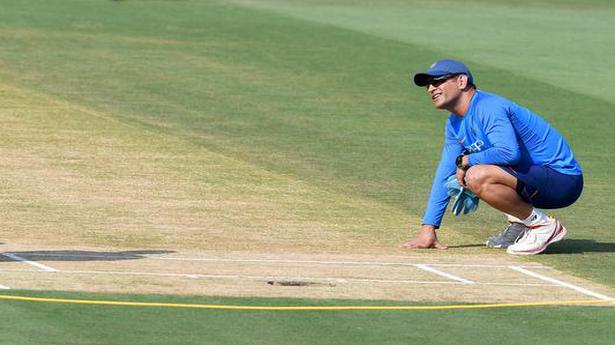 Has the decision to rest M.S. Dhoni for the last two one-dayers of the ongoing India-Australia series inadvertently ended the former captain’s international career at home?

Should India regain the Cup, Dhoni would retire on a high. In case, India falls short, Dhoni can exit the world stage with the grace befitting a champion cricketer.

No doubt, Dhoni would have loved to see his last appearance at Ranchi finish on a winning note. On the brighter side, the “finisher” has the satisfaction of playing his last international game, at home, in a city where it all started.

What Dhoni brings to the field is far more than what gets reflected by numbers, records or detailed statistics.

In fact, on Sunday night in Mohali, when the Indian bowling was under strain, many must have missed Dhoni’s calming presence. The bowlers, especially the spinners, appeared clueless, partly because Dhoni’s “guidance” from the behind the stumps was missing.

Captain, bowlers and those batting in the company of Dhoni have all praised the man’s astute reading of the game in the middle. In the Indian dressing room, if the DRS stands for “Dhoni Review System,” it is not without reason.

Without Dhoni’s pro-active approval, Kohli is not known to go for referrals. In Kohli’s words, “I don’t think I’ve come across a better cricketing brain just in terms of planning and knowing what’s happening in the game and what can be done.

Blessing to have him

“Sometimes I like to follow my own instinct as well but whenever I ask him anything 8 or 9 out of 10 times, Dhoni always tells you things that work. So it’s a blessing to have him.”

Rohit Sharma has gone on record saying Dhoni’s decision to make him open the innings in ODIs, in 2013, was “career-changing”. The vice-captain went on, “I became a better batsman after that. In fact, it helped me understand my game better, react better according to situations.”

Others like Jasprit Bumrah, Bhuvneshwar Kumar, Ishant Sharma, Ravindra Jadeja, Yuzvendra Chahal and Kuldeep Yadav and Kedar Jadhav, among many others come to mind, have all spoken of Dhoni’s contribution in their moment of success.

Clearly, Dhoni has set the bar far too high for young apprentices like Rishabh Pant, Ishan Kishan and K.S. Bharat.

With Dhoni not expected to be keen to be part of any series post the ensuing World Cup, fans are sure to watch every outing of this great cricketer in the IPL with enhanced emotions.

Come the World Cup, in all probability, Dhoni will make his last appearance. For a wicketkeeper to make a ‘360-degree impact’ on Indian cricket and players, Dhoni surely had special abilities. It will be tough to find a parallel to this ‘small-town’ boy’s lasting legacy.

Without naming Mahendra Singh Dhoni, Kings XI Punjab’s head coach Mike Hesson suggested that a coach or a captain “make a clear decision instead of making an emotive one.” Asked for his take on Dhoni rushing to the field during the last-over drama in Thursday’s match in Jaipur, the former New Zealand coach said, “If […]

One of the brightest spots in an otherwise inconsistent campaign for Mumbai has been Shams Mulani’s consistent outings. Be it with his left-arm orthodox spin or his crucial fifties lower down the order, the southpaw has been impressive all through this Ranji Trophy season. Throughout his development from Mumbai’s age-group squads, Mulani has built a […]